A commenter, Steve, left a message on a previous post about the North American Union project, which has been shuffling along under the table during the last three administrations. Steve is right to be concerned, considering that he lives at the hub — the Kansas City Smart Port:

I live in Kansas City, and they want to put a point of entry here and make it sovereign territory of Mexico. There would be no inspections of cargo until it got here.

That’s going over real well here, and of course it’s being denied.

Who the bleep are these cretins? Let’s make the world a nicer, happier place by pi**ing off our citizens. Perhaps people need to reread the Declaration of Independence and the Constitution, particularly the Bill of Rights, paying attention to the first couple of amendments.

Unfortunately, those founding documents are honored more in the breach by those in power. Bush would be booed off the stage now were he to attempt to deliver a speech on individuals and liberty. On several fronts he’s busy selling our sovereignty.

Last year, World Net Daily looked at the problems with KC and its Smart Port, including the movers and shakers, not to mention the pushers of this project, already well underway. Back then, Jerome Corsi noted an interesting development: 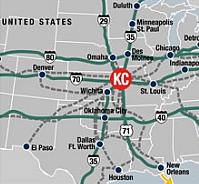 A Mexican customs facility planned for Kansas City’s inland port may have to be considered the sovereign soil of Mexico as part of an effort to lure officials in that country into cooperating with the Missouri development project.

Despite adamant denials by Kansas City Area Development Council officials, WND has obtained e-mails and other documents from top executives with the KCSmartPort project that suggest such a facility would by necessity be considered Mexican territory – despite its presence in the heartland of the U.S.

The documents reveal a two-year campaign initiated in 2004 and managed by top SmartPort officials to win Mexico’s agreement to establish the Mexican customs facility within the Kansas City “inland port.” Kansas City SmartPort launched a concerted effort to advance the idea, holding numerous meetings with Mexican government officials in Mexico and in Washington to push the Mexican port idea in concert. The effort involved Missouri elected officials, including members of the U.S. House of Representatives and Senate.

Corsi drew on emails and statements by those involved in the SmartPort development that the news was to be kept from the public:

[They were] obviously concerned that press scrutiny might end up producing an adverse public reaction that could destroy the project. Gutierrez specifically proposes a low-profile strategy designed to keep the KC SmartPort and the Mexican customs facility out of public view.

“The one negative that was conveyed to us was the problems and pressure the media attention has created for both sides,” he wrote. “They want us to stop promoting the facility to the press. We let them know that we have never issued a proactive press release on this and that the media attention started when Commissioner (Robert) Bonner was in KC and met with Rick Alm. The official direction moving forward is that we can respond to the media with a standard response that I will send out on Monday and refer all other inquiries to U.S. Customs. I will get the name from them to refer media calls.”

That was 2006. Now comes the latest below-the-radar meeting, again reported by World Net Daily. It was held in Canada last week, with only one press person permitted in. Those attending were a Who’s Who of Political Elites:
– – – – – – – – – –

The Canadian event is just the latest of a series of meetings, policy papers and directives that have citizens, officials and members of the media wondering whether these efforts represent some sort of coordinated effort to implement a “merger” some have characterized as “NAFTA on steroids.”

Nevertheless, opposition is mounting. And it’s not just coming from the tinfoil hat brigade.

Perhaps the most blistering criticism came earlier this summer from Lou Dobbs of CNN – a frequent critic of President Bush’s immigration policies.

“A regional prosperity and security program?” he asked rhetorically in a recent cablecast. “This is absolute ignorance. And the fact that we are – we reported this, we should point out, when it was signed. But, as we watch this thing progress, these working groups are continuing. They’re intensifying. What in the world are these people thinking about? You know, I was asked the other day about whether or not I really thought the American people had the stomach to stand up and stop this nonsense, this direction from a group of elites, an absolute contravention of our law, of our Constitution, every national value. And I hope, I pray that I’m right when I said yes. But this is – I mean, this is beyond belief.”

What has Dobbs and a few other vocal critics bugged began in earnest March 31, 2005, when the elected leaders of the U.S., Mexico and Canada agreed to advance the agenda of the Security and Prosperity Partnership of North America.

No one seems quite certain what that agenda is because of the vagueness of the official declarations. But among the things the leaders of the three countries agreed to work toward were borders that would allow for easier and faster moving of goods and people between the countries.

Coming as the announcement did in the midst of a raging national debate in the U.S. over borders seen as far to open already, more than a few jaws dropped.

Rep. Tom Tancredo, R-Colo. and the chairman of the House Immigration Reform Caucus as well as author of the new book, “In Mortal Danger,” may be the only elected official to challenge openly the plans for the new superstate.

Responding to a WorldNetDaily report, Tancredo is demanding the Bush administration fully disclose the activities of the government office implementing the trilateral agreement that has no authorization from Congress.

Tancredo wants to know the membership of the Security and Prosperity Partnership groups along with their various trilateral memoranda of understanding and other agreements reached with counterparts in Mexico and Canada.

And the same inane excuses for secrecy still apply today:

Geri Word, who heads the SPP office, told WND the work had not been disclosed because, “We did not want to get the contact people of the working groups distracted by calls from the public.”

World Net Daily has been digging, but it can’t find any congressional oversight on this potential monster:

WND can find no specific congressional legislation authorizing the SPP working groups nor any congressional committees taking charge of oversight.

Many SPP working groups appear to be working toward achieving specific objectives as defined by a May 2005 Council on Foreign Relations task force report, which presented a blueprint for expanding the SPP agreement into a North American union that would merge the U.S., Canada and Mexico into a new governmental form.

World Net Daily says the SPP began in earnest in 2005, but this thing has been in the works since NAFTA was signed by Bush I in 1992. President Clinton made its passage a priority in 1993. And Bush II has continued in his his daddy’s footsteps, pushing this new world order.

The New World belongs not to your children or their liberty but to the Transnationalist Capitalists. It is being pushed through by people who have everything to gain and nothing to lose.

Guess who gets the short end of the stick?

You can dig forever on this thing, but scroll to the bottom of this World Net Daily page to see the yeoman’s job they have done on gathering the materials about this monstrously large attempt to eradicate the sovereignty of three nations. Mexico stands to gain much, but fortunately, Canada is prosperous enough and dislikes us sufficiently that we may become bedfellows of necessity in this fight to retain our borders.

And whoever runs for President from the Republican side had better listen to Tom Tancredo. He appears to be the only one paying attention.

6 thoughts on “Who the Bleep Are These Cretins?”