Saturday, being a slow day on the blogs, is usually reserved for either poetry or ranting. Today’s post will be a little of both.

Ever since we posted the Mohammed-burning video, we’ve been getting email from various folks complaining about it. They think it’s stupid, or adolescent, or pointless, or only plays into the hands of our enemies, etc. In other words, they’re on our side, but think Flaming Mo was not a productive use of our blogspace.

We have also come under criticism for our recent anti-Bush posts. One regular reader says he views our opinions on the topic as the right-wing equivalent of moonbattery, and will no longer read our blog. Our ideas about the amnesty bill, the NAU, the penetration of the administration by the Muslim Brotherhood, etc. grade into Bilderburg/Trilateral Commission/Illuminati country. We are at risk of descending into paranoid delusion.

He may be right. I used to be less paranoid than I am now, but learning about modern Islam — from Jamaat ul-Fuqra to the Ikhwan to the Kosovar Mafia to Hizb ut-Tahrir — has made me paranoid. It’s hard not to be paranoid when confronted with what goes on today.

So what is our function here? What is our purpose? To publicize pointless adolescent pranks and spread paranoia? 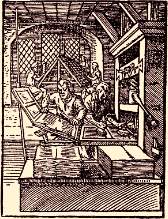 Bloggers are the modern equivalent of the pamphleteers of the 18th century. We’re facilitating a conversation and a communication that would otherwise not occur. Most of us are doing this for little or no money, and some are taking great risks in the process.

Our governments and the media have shut out any effective and well-informed discourse on the topic of the Great Jihad, so it’s left to us ordinary citizens to take up the slack. We’re on our own.

If we do not yell and bang on our saucepan lids, our new status as unwilling dhimmis will be forced down our throats by those who know better.

And, yes, sometimes we exaggerate and engage in overwrought rhetoric. After all, Gates of Vienna is a propaganda operation.

Some of our readers think that when the Danes burned Mohammed in effigy, they were in effect yelling “Down with the government!” into a closet. That is, the midsummer caper was a feel-good stunt with no practical effect, just a way for a few boisterous Vikings to have a good time.

But the evidence is that it was much more than that.

It doesn’t seem like that much of a deal, to have an embedded video here at Gates of Vienna, which is only a minor blog. However, the link from Little Green Footballs sent a lot of people over here to watch the video. We saw a huge surge of traffic this week, with about 40,000 people coming to watch Flaming Mo over the last few days. As word of the event spread, links to it popped up all over the internet, in blogs, online newspaper comment sections, and discussion forums, from Sydney to Helsinki to Mumbai to Toronto.

In addition, a number of other blogs, some of them much larger than ours, embedded the video. At a rough guess I would think that a million people have by now seen the Danes burn Mohammed. That’s not an insignificant amount of publicity, and it is most certainly not shouting subversion into a closet.

The reaction in the discussion boards and comments was overwhelmingly supportive of what the Danes did. And the objections were mostly of the same type, that “this is stupid and ineffective.”

Regardless of what you think of the video stunt — and it is tacky and amateurish — people are indeed eager to see something like it. All over the infidel world people are hungry for a sign that there is someone, somewhere who is willing to brave the storm of political correctness and insult the Muslims. When you consider the vile invective and murderous behavior that Muslims exhibit towards the rest of us every day, it’s amazing that anyone considers something as innocuous as the Danish video to be “going too far”.

So people are hungry to hear the message that things can be different, that someone is willing to stand up and express the same feelings they have, that there are others who feel the way they do. Part of the success of the current PC regime lies in atomizing its opponents — without the internet, and with the media in lockstep, those who stand in opposition to the zeitgeist would not realize how many of us there are. But Gates of Vienna’s site meter tells the true story: there are many thousands, and presumably millions, who feel the same way.

So part of our job is to give voice to the voiceless, to let others know that they are not by themselves. It brings to mind a couple of stanzas from Wilfred Owen’s fragmentary poem “The Calls”:
– – – – – – – – – –

Then sometimes late at night my window bumps
From gunnery-practice, till my small heart thumps
And listens for the shell-shrieks and the crumps,
But that’s not all.

For leaning out last midnight on my sill,
I heard the sighs of men, that have no skill
To speak of their distress, no, nor the will!
A voice I know. And this time I must go.

Or Walt Whitman, from “Leaves of Grass”:

I keep returning to the Danes because they offer something to the rest of the West that nobody else can give: they are willing to stick it to the Man.

Our regular Danish commenter and translator Phanarath had this to say on the topic in an email to Dymphna yesterday:

The spirit of the Danish people can even stand a comparison with the Americans and we totally outshine the countries around us.

We hold a spiritual key of wisdom here and if we can combine it with the American key of faith and idealism, then we can together revitalize the western world. And many people know this intuitively as we can see in the huge response to the burning of the doll of Mohammed. If that event had come from any other country, the response would have been minimal.

The Germans love the Danes, and so does most of western and eastern Europe. Israel loves us for those stories from WW2. Australians have almost the same mentality as the Danes and we get along great with them.

The Danes can be the link that gathers the whole western world together in a way that America cannot do by itself. This is what I believe is coming, and we can see it happening already on a small scale.

And no one will mind or feel intimidated by our cute little country; they will just look at us and want to do as we do, but the strength and power behind it all will come from America. One of America’s great forces is that you have the ability to feel a oneness with things you like and so it will feel like your own project, with the difference this time that you have the Danes in between you and the rest of the West and that will make everyone follow along without any resentment. Including Japan of course.

Phanarath sees his country the same way as I do: the Danes are leading the way. Keep one eye on Denmark.

And keep the other eye on history, as Al Stewart did in his song “Constantinople”:

This song is from the album 24 Carrots, which was out of print for many years, but has recently been re-released.

Times have changed, and voices are being muffled across the Western world.

So we must act as the tongue of you. Tied in your mouth, in ours it begins to be loosen’d.

29 thoughts on “Voiced and Unvoiced”