Matt Sanchez is embedded with the troops in Iraq. Via Pajama Media, he observes:

As a media embed in the United States military, a big part of my job is to observe, but as I watched the members of the 96th Transportation Company out of San Antonio, Texas, work tirelessly in preparation for their mission, I got to thinking that something was missing. Something was definitely different between wartime Americans deployed overseas and peacetime Americans hunkered down in the United States. And then it struck me, like the game show contestant who beats his opponents to the buzzer, what was missing from the time I left the United States, only a week before, was the sense of despair, frustration and self-centered complaining.

Someone tell me when the American public went from being the can-doers to the will-whiners?

Well…Westhawk happened to visit this question from another direction when he reviewed an essay by Robert Kaplan in The American Interest. Kaplan calls his essay “Forgetting the Obvious” and it’s one of those analyses that makes you smack your head and wonder why you haven’t been able to articulate these ideas, even though they were there, a kind of “unthought known” as Gagdad Bob would say.

Mr. Kaplan lays out his case for America’s inability to fight what I would call “manly wars.” We castrate our military and then send them out to die…for what, precisely? Here’s Mr. Kaplan’s observation, which explains the whining that Matt Sanchez sees:

Some truths are so obvious that to mention them in polite company seems either pointless or rude. What is left unstated, however, can with time be forgotten. Both of these observations apply today to the American way of war. It is obvious that a military can only fight well on behalf of a society in which it believes, and that a society which believes little is worth fighting for cannot, in the end, field an effective military. Obvious as this is, we seem to have forgotten it.

Then, Mr. Kaplan proposes a way to remember that will make us more effective:

First, of course you start with history, and he brings out Sun Tzu and Clausewitz (to which I would add Colonel John Boyle, USAF). What he notices about them is their presuppositions:

Both Sun-Tzu and Clausewitz believe-in their states, their sovereigns, their homelands. Because they believe, they are willing to fight. This is so clear that they never need to state it, and they never do.

What is obvious, however, is left unstated not because it is insignificant, but because it is too significant: War is a fact of the human social condition neither man wishes were so. Sun-Tzu, concerned with war on the highest strategic level, affirms that the greatest warrior is one who calculates so well that he never needs to fight. Clausewitz, interested more in the operational level, allows that war takes precedence only after other forms of politics have failed. Both oppose militarism, but accept the reality of war, and from that acceptance reason that any policy lacking martial vigor- any policy that fails to communicate a warrior spirit-only makes war more likely. [Emphasis added]

Sun-Tzu and Clausewitz could rise to the level of theory only because they had absorbed practice. So I could only grasp their meaning after living beside junior officers and senior NCOs whose logic, like theirs, flowed from patriotism and personal commitment. Now, patriotism, we have heard, is the last refuge of the scoundrel. It can be that when patriotism is misappropriated by those who have little loyalty to place, and who therefore lack any accountability for their words or their views. It is easy, after all, to be in favor of this or that cause, or against some other ones, if one has no real stake in the outcome. But while some patriots are scoundrels, the vast majority are more trustworthy than those who are not, precisely because they do accept a stake in outcomes. And they do so most often because patriotism overlaps with what, for lack of a better phrase, is a kind of moral hardiness, by which I mean an attitude of serious engagement concerning right and wrong behavior. I saw this in one American soldier, marine, sailor and airman after another. 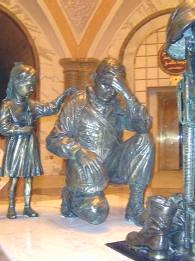 Meanwhile back at home, the sneering continues unabated, the fifth column that aids and abets those who would destroy us. The jihadists have created the perfect weapon out of America’s lack of will and the jihadists über will: a machine of destruction made of human body parts, including many brains that are willing, even eager, to annihilate themselves in order to bring about our destruction. That’s some asymmetrical weapon they have created out of all-too-mortal flesh. How do we respond to it without losing our deepest selves in the process?
– – – – – – – – – –
It used to be that our military was expected to hold that place for us, while we at home held their places here intact. But that world is gone, destroyed mainly by the machinations of the elite and the press in the Vietnam slide to dishonor and despair. Dishonor on the part of civilians who failed to hold the places for those men engaged in a long and bitter war, and despair on the part of the military who watched helplessly as the elites turned victory into sour defeat — in the process leaving million of South Vietnamese to their horrific fate.

Kaplan says it boils down to a lack of faith which has resulted in a bitter divide — a chasm — between military and civilians here at home. The warrior class, which still exists like some anachronistic samurai guild, seldom “interfaces” with the elites in their various transnational guises. Military families stick together; they know too well the pain of disengagement that civilians begin to set in motion as soon as they become uncomfortable about the facts of death, destruction, and uncomfortable truths about war’s grim necessities:

Never-say-die faith, accompanied by old-fashioned nationalism, is alive in America. It is a match for the most fanatical suicide bombers anywhere, but with few exceptions, that faith is confined to our finest combat infantry units-and to specific sections of the country and socio-economic strata from which these “warriors” (as they like to call themselves) hail. They are not characteristic of a country in many ways hurtling rapidly in the opposite direction. This is not the 1950s, when Americans felt a certain relief in possessing “the bomb.” Fifty years later, most Americans feel a certain relief in never having to even hear about “the bomb.”

Faith is about struggle, about having confidence precisely when the odds are the worst. Faith is the capacity to believe in what is simultaneously necessary but improbable. That kind of faith is receding in America among a social and economic class increasingly motivated by universal values: caring, for example, about the suffering of famine victims abroad as much as for hurricane victims at home. Universal values are a good in and of themselves, and they are not the opposite of faith. But they should never be confused with it. You may care to the point of tears about suffering humankind without having the will to actually fight (let alone inconvenience yourself) for those concerns. Thus, universal values may pose an existential challenge to national security when accompanied by a loss of faith in one’s own political values and projects.

The loss of a warrior mentality and the rise of universal values seem to be features of all stable, Western-style middle-class democracies. Witness our situation. The Army Reserve is desperate for officers, yet there is little urge among American elites to volunteer.

I would venture that the warrior class in this country is diverted somewhat into the police force and fire brigades. These are jobs requiring valor and extremes of courage. But their numbers are not enough to sustain us against our aggressors. Where are the officers to come from? Many elite schools don’t even permit ROTC components on their campuses, though they are more than glad to take federal monies. In a real world, schools which banned the military should not be eligible for federal aid. But then again, except for a few outstanding examples, our Imperial Congress is made up of people who definitely do not belong to Mr. Kaplan’s warrior class. Far from it: even those charged with military affairs are rude and demanding when they call officers from the Pentagon to appear before their courts to be admonished, blamed, and sarcastically ridiculed.

I grew up in a warrior town during the period of national service. It was simply expected: at some point in your late teens or early twenties, you gave two years to your country and then you went home. The warrior class then was distributive and many men remembered their service if not with fondness, at least with a wry understanding of how much they’d learned and grown in those years. It is seldom I have run across men of that generation who complained about the burden. For the most part, they were glad to have done it — to have it behind them.

That world is gone. Now our warrior class must be drawn from a shrinking population of those who believe in this country and share a common faith that it is worth defending. Those who do not share that faith also often don’t respect the motives or character of those who remain proud of their service to their country.

Mr. Kaplan is right: that is the unbridgeable gap. I do not see a way to build a bridge across this chasm, but unless we do, unless we make welcome room for our returning warriors and give them the respect their faithful service deserves, we will be at the mercy of those countries with plenty of young men to spare — plenteous because they have killed off the girl babies of this cohort who would have become their wives. As Tibet was over run, so will be Taiwan. There will be millions of soldiers to choose military special forces from. And the men will be glad to go, to be able to escape otherwise empty lives, sans wife or children.

Without a draft or a revitalized Reserve and National Guard that ties the military closer to civilian society, in the decades ahead American troops may become less soldiers, marines, sailors and airmen, and more…in essence a guild in which the profession of combat-arms is passed down from father to son. It is striking how many troops I know whose parents and other relatives had also been in the service, especially among the units whose members face the highest level of personal risk. Contrast this with the fact that, at the 2006 Stanford commencement ceremony, Maj. General Lehnert, whose son was the lone graduating student from a military family, was struck by how many of the other parents had never even met a member of the military before he introduced himself.

The future Baron hung out with the ROTCs at college. He enjoyed their company and it was the only place he could get military history courses. But even his school graduated only a handful this year.

Like orders of nuns and priests, the old military order may be passing. The idea of service to something larger than oneself has certainly passed, and we are the poorer for it. In fact, it may be the death of us.

25 thoughts on ““The Emergence of a Separate American Warrior Caste””