Our Swedish correspondent LN is following the news about Dahn Pettersson, the notorious criminal politician in Skåne who dared to utter the truth about Kosovar Albanian immigrants and the heroin trade in Sweden.

Here is his translation and condensation of a report in yesterday’s Sydsvenskan:

Not only Dymphna and the Baron appear on the radio — the convicted slanderer Dahn Pettersson was also lured to appear on a local radio program at 10 o’clock last Saturday morning, together with his party boss Leo Harvigsson and the chairman of the local Albanian Club, Luan Bajra.

Luan Bajra was hoping to get an apology from Mr. Pettersson for having declared that Kosovar Albanians are behind almost all heroin smuggling into Sweden.

According to Dahn Petterson some 10-15 persons have contacted him and expressed a wish to help pay his fines. “The amount is high for a half-time pensioner like me,” said Dahn Pettersson. 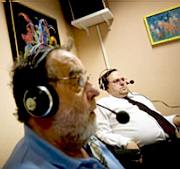 The radio broadcast that was intended to be about the conviction in the district court quickly developed into a back-thumping feast between the moderator and call-in listeners about everything that is wrong with “all these foreigners coming into Sweden”.

“Most of those we are importing are criminals,” one listener said.

“We Swedes are naïve,” said another.

Then the discussion changed to deal with the difference between refugees and ordinary asylum-seekers. This is a theme that fascinated many.

Somewhat later in the radiocast Luan Bajra got what he had been hankering for: Dahn Pettersson expressed his apology “— to all honest Kosovar Albanians”. However, this apology will not prevent him from appealing the conviction.

How the conviction will influence his role as a politician in the future will be decided at the next party meeting. “Anyone confined to prison will be expelled — but for me it didn’t result in prison…”, Dahn Pettersson said.

I don’t understand the part about Mr. Pettersson being a “half-time pensioner”. Can any of our Swedish readers explain why an elected politician is also a pensioner? Does it mean that he works at another job half-time and draws a part-time government salary as an elected official?

5 thoughts on ““Most of Those We Are Importing Are Criminals””