Brian De Palma’s 1974 movie Phantom of the Paradise tells the story of the songwriter Winslow Leach, who sells his soul to a Satanic music producer named Swan. When Winslow attempts suicide in order to escape Swan’s clutches, Swan utters these memorable lines: 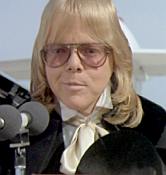 What a foolish thing to do. Didn’t you read your contract closely? See where it says “terms of agreement”?

This contract terminates with Swan.

No more suicides. You gave up your right to rest in peace when you signed the contract. But if you do find a loophole, forget it. That stays sealed as long as I have the power to bind you.

Replace “Swan” with “Allah”, and Winslow becomes “Everymuslim”: This contract terminates with Allah.

You can’t leave Islam. Don’t even think about it.

Strangely enough, an increasing number of Muslims do seem to be thinking about it, and some of them are risking their lives in order to translate thought into action. As I have reported previously, individual apostates and groups of ex-Muslims are popping up all over.

There are prominent names like Ibn Warraq and Ali Sina, and groups such as Apostates of Islam, Former Muslims, and the German group Ex-Muslime. New chapters of the latter organization have recently appeared in Sweden and Denmark.

Our Danish correspondent Skjoldungen is actively involved with some of these apostate groups, and he sent us this report earlier today:

Here’s some more on the topic of the elusive “moderate Muslim”. Right now I’m very busy helping the new organisation Ex-Muslime in Germany, Scandinavia, and Britain. They don’t believe in “moderate Muslims”. According to them there are only two types of Muslims: the active ones and the “sleeper” ones.

The Ex-Muslime are atheists and — according to my contact person — are threatened by Muslims everywhere. He and his family are constantly on the move and in hiding. They originally came from Germany, but are establishing a foothold in Sweden and Denmark. Unfortunately, they don’t know very much about our countries, so they need a lot of hand-holding.

However, they claim that thousands and thousands of Muslims are just waiting for an occasion that can motivate them enough to leave Islam.

Skjoldungen will be on the road in different European countries for the next fortnight or so, but has promised us a more comprehensive report when he returns to Denmark.

And now there’s the latest manifestation of the trend, in Britain this time, and reported in the Grauniad, of all places:

A new group of secular-minded former Muslims in the UK has urged the government to cut all state funding to religious groups and to stop pandering to political Islam.

The Council of Ex-Muslims of Britain, launched yesterday in London, opposes the interference of religion in public life. Its spokeswoman, Maryam Namazie, said the group provided an alternative voice to the “regressive, parasitical and self-appointed leaders” from organisations such as the Muslim Council of Britain and the “oxymoronic” Islamic Human Rights Commission.

“We want to challenge the Islamic movement,” she said. “It does not surprise me people are afraid to criticise Islam. There has been too much appeasement from the government. There are specific policies and initiatives aimed at Muslims and this approach divides society.”

The council’s manifesto calls for the freedom to criticise all religions and the separation of religion from the state and legal system. Another aim is to break the taboos that come with renouncing Islam.

The launch of a Central Council of Ex-Muslims in Berlin has inspired similar groups in Sweden, Denmark, Norway and Finland. The British branch has 25 members who are prepared to have their names and photographs published.

These apostates are putting their lives in danger by publicly renouncing their faith, but their increasing numbers indicate that fear is no longer enough to bind them to their barbaric and murderous “religion”.

There’s an old Arab proverb: “A thousand throats can be cut in a single night by a running man.”

But what about ten thousand? Or a hundred thousand?

Even riding the fleetest of camels, it simply isn’t possible.

4 thoughts on “Jamming the Exits”