Last year, Memri carried several excerpted translations of interviews with Adonis, the nom de plume of a Syrian national who lives in Paris. These interviews didn’t seem to gain much attention at the time; trawling through Technorati and Google fails to bring in a large haul of notices about this man’s views of Arab culture. 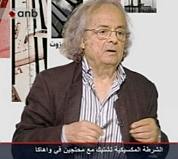 Adonis was nominated for the Pulitzer Prize in 2005. For his poetry, no less. It is remarkable because Arab culture permits the expression of Truth and Beauty only in its architecture. It has little use for the written word — except for beautiful copies of the Koran (in Arabic only, please). Music as an aesthetic experience has no place in Muslim society, as the Taliban demonstrated so extremely.

There is no history but Muslim history, and even that must conform first to the Koran. There is no poetry; Mohammed had no use for poetry. Hafiz, one of the great 12th century Persian poets, was persecuted for his work — as were many others. Fortunately for us, he persisted in the face of Arab repression and so his work lives on.

Adonis says that Arabic culture is extinct through its own doing:

“I don’t understand what is happening in Arab society today. I don’t know how to interpret this situation, except by making the following hypothesis: When I look at the Arab world, with all its resources, the capacities of Arab individuals, especially abroad — you will find among them great philosophers, scientists, engineers, and doctors. In other words, the Arab individual is no less smart, no less a genius, than anyone else in the world. He can excel — but only outside his society. I have nothing against the individuals — only against the institutions and the regimes.

“If I look at the Arabs, with all their resources and great capacities, and I compare what they have achieved over the past century with what others have achieved in that period, I would have to say that we Arabs are in a phase of extinction, in the sense that we have no creative presence in the world.”

That is our real intellectual crisis. We are facing a new world with ideas that no longer exist, and in a context that is obsolete. We must sever ourselves completely from that context, on all levels, and think of a new Arab identity, a new culture, and a new Arab society.”

“Imagine that Arab societies had no Western influence. What would be left? The Muslims must…”

Interviewer: “What would be left?”

Adonis: “Nothing. Nothing would be left except for the mosque, the church, and commerce, of course.”

“The Muslims today — forgive me for saying this — with their accepted interpretation [of the religious text], are the first to destroy Islam, whereas those who criticize the Muslims — the non-believers, the infidels, as they call them — are the ones who perceive in Islam the vitality that could adapt it to life. These infidels serve Islam better than the believers.”

Or so he says. But who wants to hear the truth about themselves? Especially a culture that practices taqiyya as a matter of course. Will they listen to this truth or will they bully or kill the messenger? Those seem to be the only choices.

Arab culture has two positions and two only: you are either the tyrant or you are the victim. Is this the reason for the death of creativity in this culture, or did the death of creativity leave them no choice but to scramble for one position — the tyrant, the guy on top — while trying to avoid the one down place in which the victim resides? This is not a culture with flexibility.
– – – – – – – – – –
The only game Arabs seem to understand is “King of the Hill.” And Adonis, this Syrian poet, knows only too well how that game inevitably ends: despotism and the rule of the bully. The only question is why he seems to be so disingenuous about the situation. “Arab culture doesn’t permit creativity.” This is something to remark upon?? When did it ever promote creativity? What did it take from other cultures except in the field of martial technology, all those bits of knowledge that proved useful to the violent expansion of the Ummah?

Arabic culture is sterile precisely because it doesn’t take from other cultures. Its sense of superiority doesn’t permit borrowing or stealing those things worth having.

This is not the case for the West. From gunpowder to macaroni to algebra, we take and we modify and we hand it back to anyone who desires access to it.

Thus is the world enriched.

In another interview, Adonis makes the following claim:

“Words are treated as a crime today. Throughout history, there has never been anything similar to what’s happening today in our Arab society — when you say a word, it is like committing a crime.”

Adonis: “Words and opinions are treated as a crime. This is inconceivable.”

Interviewer: “You can be arrested for writing an article.”

“In the Koran itself, it says that Allah listened to his first enemy, Satan, and Satan refused to obey him. I believe that Allah was capable of wiping out Satan, yet He listened to Satan’s refusal to obey Him.

“At the very least, we demand that Muslims today listen to people with different opinions.”

I disagree that this lack of free speech in Muslim cultures is something new. In fact, real freedom of speech has been rare, historically in any culture, and this muffling of the very human need to be able to express oneself without hindrance is hardly confined to the Arabs. Beginning with the Catholic Church, the West itself is full of examples of thinkers whose controversial views were silenced. Hans Küng is only one of a long line of theologians who ran afoul of Rome’s “nihil obstat imprimatur.”

“If we want to be democratic, we must be so by ourselves. But the preconditions for democracy do not exist in Arab society, and cannot exist unless religion is reexamined in a new and accurate way, and unless religion becomes a personal and spiritual experience, which must be respected.

“On the other hand, all issues pertaining to civil and human affairs must be left up to the law and to the people themselves.”

And some are so ignorant of history that they cannot see that all countries and cultures have been, to some extent, theocracies. It is absolutism that annihilates. Insistence on a lack of ambiguity is what kills a culture, and it is this insistence — or fear — of what cannot be known completely that seduces us into setting up closed systems. Islam itself is a closed system.

In the end, that is why it will not prevail. Yes, the demographics are there, but numbers alone will never suffice. It was not sheer numbers by themselves which changed South Africa. It is not the numerical superiority that will permit Islam’s renewal. And unless Islam renews itself, it will die — what is true on the cellular level remains true on the cultural level, too.

4 thoughts on “Honest Arab: “We Are Extinct””