We have posted previously about the crime on the statute books in Finland and Sweden known as hets mot folkgrupp, which essentially means “defaming an ethnic group”. Needless to say, it’s only possible to defame third world immigrants. No one ever gets charged under the law for defaming Finns or Swedes — the latter, by the way, are now known in their own country as “persons of Swedish background”.

The latest victim of these ethnic witch-hunts is a politician in Skåne (South Sweden) who dared to make a potentially negative reference to some members of a protected ethnic group.

To make the incident poignantly ironic, Dahn Pettersson committed his inadvertent thought crime when he was attempting to draw attention to the plight of the homeless. Perfectly acceptable politically correct intentions are not good enough — Mr. Pettersson has veered from orthodoxy, and must be punished.

Our Swedish correspondent LN sent us this translation from an article in yesterday’s Sydsvenskan:

Burlöv politician convicted of “agitation against an ethnic group” 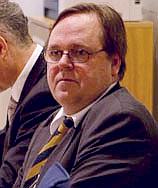 The Burlöv politician Dahn Pettersson of the Alliance Party has been convicted of “incitement/agitation against an ethnic group” [hets mot folkgrupp].

Mr. Pettersson was indicted for hets mot folkgrupp because he had written a petition to the municipal council. In the petition he argued that the large number of Kosovo Albanian immigrants to Sweden led to an increase of heroin smuggling.

According to the district court’s judgment, Dahn Pettersson’s petition without hesitation gives expression to disrespect/contempt and clearly deprecates the whole group of Kosovo Albanians and not just the small number that devote themselves to heroin smuggling.

The law of “incitement against an ethnic group” is a restriction of freedom of speech and therefore each statement must be assessed in its context, the district court points out. Objective criticism (criticism founded on facts) is not punishable, but according to the district court Dahn Pettersson’s petition clearly falls outside the boundaries for a impartial and trustworthy discussion.

The district court has also taken the European Convention about Human Rights into consideration. The stated aim of the petition was to raise the question about the situation of the homeless in the Burlöv Municipality in order to provide better conditions for them.

According to the court it is obvious that disparaging statements about Kosovo Albanians were not necessary in order to achieve the desired effect. [Ergo — the Thought Police have declared their verdict — LN] Therefore the District Court is of the opinion that the European Convention does not prevent the sentencing of Dahn Pettersson.

The district court has therefore sentenced Dahn Pettersson to one hundred fine-units, in summa

SEK 18,000 ($2570), for “minor agitation against an ethnic group”. Thereby the court goes entirely on the prosecutor’s line. The conviction can be appealed to the Court of Appeal [Hovrätten — second instance].

In his petition Dahn Pettersson asserts that the large number of Kosovo Albanian immigrants to Sweden results in an increase of heroin smuggling and homelessness. When the petition was dealt with in the Burlöv Municipality’s Executive Board the Right Wing Conservative Lars Johnson began to wonder about the contents of the petition, and contacted the police in order to determine from them whether the assertions squared with the facts. The police made the interpretation that it probably was a case of “incitement against an ethnic group” [hets mot folkgrupp].

Here are the translator’s concluding words:

What then was the blameworthy content of Dahn Pettersson’s petition? According to the newspaper Aftonbladet the blameful and indictable content of the petition amounted to the following verbatim passus:

95 percent of all heroin arrives via Kosovo, must you then wonder why the hoboes are increasing in number when we have imported this drug because Friggebo [female liberal idiot-politician — LN] gave 46,000 Kosovo Albanians permanent residence permits. After this mistake the heroin has flowed freely in Sweden and in Europe.

How is the increasing number of hoboes (homeless people) connected to the Kosovo Albanians? The reasoning is as follows: as a result of the already big and still increasing number of immigrants of Kosovo Albanian origin to Sweden, the easier to acquire and the cheaper the heroin will become, causing more persons to try and to use the drug. Many of these, and above all those in a weak social situation, will be hooked, fall out of the social pattern and in the end become homeless people. All Kosovo Albanians are not peddling heroin etc. but very likely 95% of all heroin smuggling and distribution in Scandinavia is handled by Kosovo Albanians. This is a well-known fact, first put into print by the newspaper Aftonbladet on February 29th, 2000. Kosovo Albanian criminal clans are spread out all over Sweden: Malmö, Lund, Landskrona, Göteborg, Karlstad, Kalmar, Halmstad and Stockholm.

LN has sent me more material from today’s media reports in Sweden, so I will undoubtedly be posting updates later on.

8 thoughts on “Muzzled in Skåne”