This post is a followup to Fjordman’s report from earlier today.

The photo you just found is from a demonstration against Islamophobia, racism and discrimination in December 2006 in central Stockholm. Helle Klein, then the political editor-in-chief of Sweden’s largest newspaper, is standing in front of a banner which reads “A Sweden for all — Stop the Nazi violence,” warning against Islamophobia in the media. If you pronounce “A Sweden for all” in Swedish, it sounds pretty much like “A Sweden for Allah.” Purely coincidental, of course. 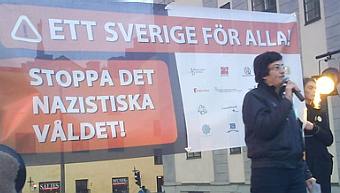 Klein held her speech at Medborgarplatsen, a square in Stockholm with a mosque notorious for its anti-American preaching. According to several Internet sources, Helle Klein is a member of the Christian Social Democrats, an organization with close links to and cooperation with the Muslim Brotherhood. Helle Klein is known for her sympathies with terrorist organization Hamas, the Palestinian branch of the Muslim Brotherhood. She has even met some of their senior leaders, while warning against the dangers posed by the Christian Zionist Right in the Unites States. She is obsessed with Israel, in a highly negative way. But she doesn’t want to talk about the rapes committed by Muslims in her own country. She wants to talk about Islamophobia.

5 thoughts on “Hamas Has a Friend in Sweden”