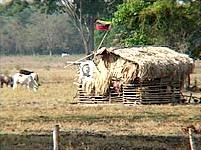 Venezuelan President Hugo Chavez said the government may take control of more private farms and food plants to increase production of beef and milk amid shortages.

Chavez asked government and military officials to help expose milk and beef companies that refuse to sell at regulated prices, and said the government will expropriate them, in comments broadcast by state-run Venezolana de Television.

“Where there’s a large land holding, the agricultural revolution is coming,’’ he said. “This is going to require a new attitude from producers.’’

“…a new attitude from producers”? A new attitude as in how far can you bend over and how fast?
– – – – – – – – – –
I hope the successful members of the agricultural sector have their passports in order and some money stashed in foreign banks where Hugo’s arm cannot reach. Anything less means ruin.

The government will also create a central planning commission to oversee all government-owned companies, doing away with autonomous management by individual company heads, Chavez said.

The president said yesterday the government will create a national electricity corporation that will take over 14 electricity companies by 2010.

Maybe he stays up at night and reads old collectivist novels translated from the Russian. Or maybe he thinks Mugabe’s ideas were really swell.

Or maybe, just maybe, he’s going to show Fidel how to do it correctly and soon…

…everyone will be starving, just like all the other attempts to collectivize and centralize individual initiative.

Then Venezuelans will be sitting in the dark, humming “Where have all the farmers gone?” — in a minor key and sotto voce, of course.

Sad, sick, stupid, ignorant, megalomaniac… what else can you say about someone so charmlessly immune to the history lessons of the 20th century?