But Starbucks obviously wasn’t Raised Right, for we are now being subjected to preaching from their choir — which is not necessarily our choice of reading material.

Someone in the Starbucks organization lives in a multicultural bubble because now their disposable cups have enlightened little messages on them. At least they’re enlightened by Seattle standards.

The first example of preaching from the side of the cup shown in this article is rigorously anti-God, which is the default belief system in such circles. “God” is for the unwashed in fly-over country. Theism is not a coastal concept, as you can see here:

“Why in moments of crisis do we ask God for strength and help? As cognitive beings, why would we ask something that may well be a figment of our imaginations for guidance? Why not search inside ourselves for the power to overcome? After all, we are strong enough to cause most of the catastrophes we need to endure.”

Well, let’s unpack this series of theological statements, shall we?

“Why in moments of crisis do we ask God for strength and help?”

Nobody says you have to, fella. If it doesn’t ring your bell, by all means refrain from asking. Join Nietzsche and the gang and be an Überman. But if you don’t mind, we’ll just watch you from here. Go for it.

“As cognitive beings, why would we ask something that may well be a figment of our imaginations for guidance?”

As cognitive beings we’re capable of making choices and if someone experiences a sense of the numinous and turns toward it, while all you feel is figments, then you can’t get there from here anyway.

“Why not search inside ourselves for the power to overcome?”

How do you know with such certainty that this egotistical rummaging through the contents of one’s mind is all that informative? Why not ask another being, human or otherwise, for advice? Or is that being insufficient to thyself?

“After all, we are strong enough to cause most of the catastrophes we need to endure.”

Speak for yourself. If, through my own inadvertence I were to cause a car accident which left me a quadriplegic, I sure would need more than just my own strength to “endure” the catastrophe I caused. Just for starters, without someone to lift me up, I’d have to lie in my own urine because I sure wouldn’t be taking a trip to the bathroom again in this lifetime.

In fact, that may be the most sophomoric sentence I’ve read this year. It’s as mindlessly cynical as its opposite expression, “God never gives you a cross greater than you can bear” is mindlessly sentimental. Both of them posit a breath-takingly shallow optimism.

However, while his pithy little sermon does show this guy’s hang-up about being self-sufficient, it also reveals him as a fake. If he were all that autonomous he wouldn’t need to convince the rest of us that he’s got The Answer. Wise men don’t say, they simply do. 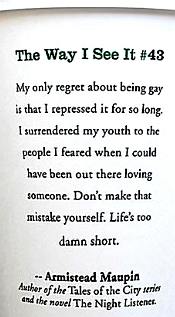 And wise men, sufficient unto themselves, wouldn’t be caught dead letting someone stamp their sentiments on a Starbucks cup, for heaven’s sake. Sheesh, mornings in the city are hard enough without preachers on the pasteboard.

Here’s another example, too… also from the Seattle mindset:

“My only regret about being gay is that I repressed it for so long. I surrendered my youth to the people I feared when I could have been out there loving someone. Don’t make that mistake yourself. Life’s too damn short.”

Oh, big deal.
– – – – – – – – – –
Most of us “surrender our youth” to fear because we want to be accepted. And if there is one thing “youth” is not capable of doing, it’s truly loving someone else. At that age we are of necessity self-absorbed little beings. We have to be: for one thing, our brain hasn’t developed the synapses for mature love. For another, we’re too busy carving out a stable identity. We don’t have the necessary maturity to love others for themselves.

What is it with Starbucks? It’s not enough to sell a bazillion cups of very personalized latte — make mine a half-caf grande latte with hazelnut, please? — but it has to add pithy preaching on the side? It looks like you’ll have to preface your order with “plain cup, no preaching, please” if you want to drink your coffee in peace.

I can’t wait to see what they’ll put up about George Bush. I can just imagine how high-minded the condemnation will sound.

Anyone care to write the script? We’ll send it in to Starbucks for you.