Hot Air seems to have the most complete round-up on the butchery at Virginia Tech University. 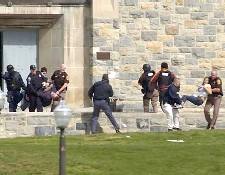 The death toll appears to be going up by the hour and there is great confusion on the campus. There are thirty two reported dead so far, and almost as many injured.

These deaths and injuries seem to have occurred at two widely separated places, a dormitory and a classroom building.

Hot Air says that there were portents of trouble earlier this month. Here’s one of his many updates:

Update: More oddness from Fox: “On April 13, the campus closed three of its academic halls after they received a letter stating that explosive devices were in the building. Classes were canceled for the remainder of the day. A bomb threat was also made against Torgerson Hall on April 2.”

In other words, something has been coming down since early in the month. Whatever it was – and is – may be very hard to trace back to its origins until the killing is over and the person or people involved have also killed themselves. Slaughter on this level doesn’t leave its perpetrators alive.

Update: According to NBC, the killer used two 9mm handguns and killed himself. It’s officially the deadliest campus shooting in U.S. history.

President Bush is supposed to give a nationally broadcast speech later on today. I don’t know if I can bear to listen.

Virginia Tech is not far from us. Our son is planning to do graduate work there in oenology. My heart sinks at the thought. He and the Baron went to see the head of that department last December and now I’m wondering if the man is alive.

So many children we know are there, or have been there. It’s hard to take this in…

NOTA BENE: Do not post comments about the need for gun control laws. I will delete them. That stupid idea has been demonstrated to be false on the merits, so get a new argument. I am in no mood to put up with sanctimonious know-nothings. There will be enough of that from those useful idiots who are proposing a cabinet-level Department of Peace.

If you feel impelled to voice such sentiments, go where you’ll have a sympathetic audience. It won’t be on this venue, however.

20 thoughts on “Massacre of Students at Virginia Tech”