UPDATE: A commenter, CW, brings up the first televised –sorry, it was covered by a television photographer, no mini-cams then — campus shooting, almost forty years ago. How different things were then.

The reaction of students and professors — which was to begin firing back — couldn’t happen now. We’ve been disarmed by an emasculated press which is yowling even now for more gun control. They seriously don’t get it; they never will either. J school is a brainwash.

This incident should be compared to the U. Texas campus tower incident in 1966. That brain cancer-deranged shooter was shot by a combination of police and fellow students [and professors –D] who pulled rifles out of their car trunks and began firing back in self-defense. If there were no armed students on the UTx campus in 1966, the death toll would have been higher as the shooter in the tower had a commanding vantage point of the entire campus.

Follow the link to an engrossing first-person account of that day. The author describes it as worse than his experience in Vietnam.

Exactly. In Vietnam, he was armed.

The first piece in this post is from the Roanoke Times online (Roanoke.com) from last August. It celebrates the defeat of the State Assembly bill that would have allowed students to register to carry handguns for their personal safety.

You will realize how fatuous this article is, when you see the lightweight backup for this writer’s reasoning: a Harvard study which said “Americans feel less safe rather than more safe as more people in their community begin to carry guns…”

This canard has been disproved so often that it is amazing that there are still useless idiots in academia who continue to repeat the fairy tale as though it were canonical truth. In fact, there have been more studies proving just the opposite. But Harvard doesn’t do those studies. Not with the feminists running the place.

This first commentary will be followed by the original op ed from a graduate student at Virginia Tech:

A graduate student at Virginia Tech wrote an eye-raising commentary in this morning’s Roanoke Times. In his piece, Bradford B. Wiles writes that he would have felt safer during last week’s evacuation of Squires Student Center if he would have had his handgun at the ready.

Wiles argues that the events of Aug. 21 reinforce his views that he should be able to carry his weapon on Virginia Tech’s campus. Students, staff and professors at Tech are not allowed to carry guns on campus, even if they are licensed to do so by the state. And the Virginia House of Delegates defeated a measure earlier this year that would prohibit universities from banning weapons on campus. When that happened, we had another commentator (a Tech professor) write about how he felt about students who pack heat on campus.

One of the things I found most interesting about Wiles’ op-ed was that he quoted a professor who said she would have felt safer if he would have had his gun on him last Monday. I’m curious whether that professor still holds that opinion or if she only said it in the moment. The comment got me wondering about how people generally feel about being in places where people can carry guns.

At the risk of being accused of being a member of the liberal media, I’ll put it out there that I don’t particularly feel safe knowing that people can carry guns around me — even if those people have licenses to do so.

Turns out, I’m in the majority. With a quick Google search, I was able to find this 2001 article by professors at the Harvard School of Public Health. The conclusion of the study is summed up here: “Americans feel less safe rather than more safe as more people in their community begin to carry guns. By margins of at least nine to one, Americans do not believe that ‘regular’ citizens should be allowed to bring their guns into restaurants, college campuses, sports stadiums, bars, hospitals, or government buildings.”

Here is the op ed linked above – the one which “raised eyebrows”:

Wiles, of New Castle, is a graduate student at Virginia Tech. 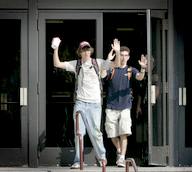 On Aug. 21 at about 9:20 a.m., my graduate-level class was evacuated from the Squires Student Center. We were interrupted in class and not informed of anything other than the following words: “You need to get out of the building.”

Upon exiting the classroom, we were met at the doors leading outside by two armor-clad policemen with fully automatic weapons, plus their side arms. Once outside, there were several more officers with either fully automatic rifles and pump shotguns, and policemen running down the street, pistols drawn.

It was at this time that I realized that I had no viable means of protecting myself.

Please realize that I am licensed to carry a concealed handgun in the commonwealth of Virginia, and do so on a regular basis. However, because I am a Virginia Tech student, I am prohibited from carrying at school because of Virginia Tech’s student policy, which makes possession of a handgun an expellable offense, but not a prosecutable crime.

I had entrusted my safety, and the safety of others to the police. In light of this, there are a few things I wish to point out.

First, I never want to have my safety fully in the hands of anyone else, including the police.

Second, I considered bringing my gun with me to campus, but did not due to the obvious risk of losing my graduate career, which is ridiculous because had I been shot and killed, there would have been no graduate career for me anyway.

Third, and most important, I am trained and able to carry a concealed handgun almost anywhere in Virginia and other states that have reciprocity with Virginia, but cannot carry where I spend more time than anywhere else because, somehow, I become a threat to others when I cross from the town of Blacksburg onto Virginia Tech’s campus.

Of all of the emotions and thoughts that were running through my head that morning, the most overwhelming one was of helplessness.

That feeling of helplessness has been difficult to reconcile because I knew I would have been safer with a proper means to defend myself.

The policy that forbids students who are legally licensed to carry in Virginia needs to be changed.

I am qualified and capable of carrying a concealed handgun and urge you to work with me to allow my most basic right of self-defense, and eliminate my entrusting my safety and the safety of my classmates to the government.

This incident makes it clear that it is time that Virginia Tech and the commonwealth of Virginia let me take responsibility for my safety.

No way, man. Your young life is merely fodder for the crazies and the politically correct who don’t want you to be able to defend yourself because being responsible for ourselves scares them.

These people don’t know yet that they’re really on their own. They think police chiefs who pontificate will also protect them.

8 thoughts on “Ringing Down the Days: A Va Tech Student’s Failed Plea from August 2006”