Most of our readers are aware of Rep. John Conyers’ efforts to pass a congressional resolution against the desecration of the Koran. One of the highest priorities of Muslim interest groups in the United States is to get this legislation and similar initiatives passed. They are following multiple strategies on these issues, lobbying for legislation that bans airport profiling, agitating for rules protecting Islamic practices in the schools, and pushing for non-legislative regulations in addition to laws and resolutions. They are seeking the expansion of the definitions of “hate crime” and “hate speech”, and a blurring of the distinction between the two.

I can’t emphasize too strongly or too often that the erosion of our freedom of speech and the encroachment of sharia in our country will come sneaking into the public discourse disguised as the protection of religious freedom. Muslim interest groups will claim — and are claiming — that all their religious practices, no matter how contrary they are to the rest of the First Amendment and the Constitution in general, are protected by the Religious Freedom Clause. 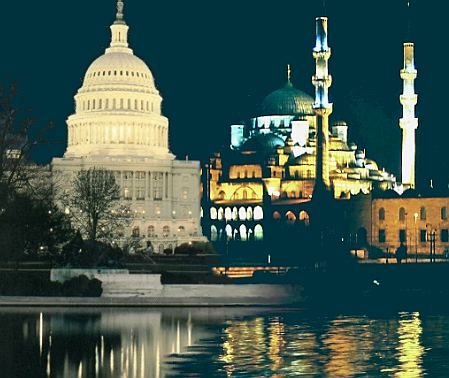 This is a pernicious strategy which is designed to turn our Constitutional liberties into a smoking ruin. And there are people in our government, both elected leaders and those within the permanent federal bureaucracy, who are all too eager to go along with this farrago.

The next skirmish in this war is taking place next week, on Thursday March 29th, in Kansas City, under the auspices of the Department of Justice. The event sounds innocuous enough — “A First Freedom Project Seminar: Federal Laws Protecting Religious Freedom” — but the significance of the occasion is revealed by the inordinate interest in it displayed by MPAC and other Muslim advocacy groups. The fact that these organizations are anxious to get their members to this meeting and intend to have an impact on it tells you a lot about what they hope to accomplish.

Meetings between the DOJ and Islamist advocacy groups that may have led to the “First Freedom” initiative are summarized at the American Muslim Perspective:

[The January 8 meeting was attended by] representatives from the American-Arab Anti-Discrimination Committee (ADC), the Arab American Institute (AAI), the Muslim Public Affairs Council (MPAC), the National Association of Muslim Lawyers (NAML), and the Islamic Society of North American (ISNA).

The January 8 meeting with Attorney General Gonzalez followed a similar meeting on December 4, 2006 between prominent American Muslim leaders with key senior US government officials to discuss the state of Islamophobia in America and US-Muslim relations. It was organized by the Bridging the Divide Initiative of Saban Center at the Brookings Institution. It was co-sponsored by the Institute for Social Policy and Understanding and the Association of Muslim Social Scientists.

Ambassador Martin Indyk, Director of Saban Center and Stephen Grand, the Director of the US-Islamic World program also addressed the meeting. This was the first US Government and American Muslim conference on Islamophobia.

The upshot is that Justice Department policy on religious discrimination is being guided by leaders from CAIR, ISNA, MAS Freedom Foundation (co-sponsors with ANSWER of the March 17 demonstration against the war), and MPAC.

As I’ve said before, this is a Trojan horse being rolled into the heart of the United States Constitution, and we have to make our voices heard if we want to stop it.

I’m asking members of the Counterjihad, especially bloggers, to travel to Kansas City if they possibly can and attend this meeting in order to offer a counterweight to MPAC, ISNA, and all the rest of the alphabet soup that fronts for the Umma here in the USA.

Then one day you’ll wake up and find that the Religious Freedom Clause protects the right of Muslims to have separate public swimming pools for men and women, or to be guaranteed a pork-free school lunch, or not to be deployed by the Armed Forces during a conflict with an Islamic country.

In other words, America will have become just like Eurabia.

Christine of the Center for Vigilant Freedom (the international coalition that has recently emerged from the original 910 Group network) has compiled a pdf file of background materials on the First Freedom Project and Islamic organizations. Here’s her cover note for the document:
– – – – – – – – – –
The Department of Justice’s The First Freedom Project on religious liberty, starting next week with a March 29 public meeting in Kansas City, Missouri, may be monopolized by Islamist organizations. Other seminars will be held in Tampa, Florida, on April 25, 2007 and Seattle, Washington, on May 10, 2007. If members of other religions attend these DOJ meetings, a more balanced view can be presented. Criticism of other religions should not be criminalized, including criticism of Islam or the Koran.

Meetings between the DOJ and Islamist advocacy groups that may have led to the “First Freedom” initiative are summarized here at the American Muslim Perspective.

As conservative writer Janet Levy has noted, “Muslim leaders such as Salam Al-Marayati, executive director of the Muslim Public Affairs Council, insist that Muslims have a right to petition for special accommodation based on their religious beliefs as mandated by the First Amendment. In truth, no requirement exists, either in state or federal statutes, requiring that such petitions be addressed or behavior adjusted accordingly.”

Below we provide background information:

I hope you can cover this DOJ Project and encourage more people to attend to balance the views offered.

Thanks!
Regards,
Christine
Director, The Center For Vigilant Freedom