UPDATE: Colonel Boyd is rolling over in his grave. The generals are trying to wreak their ignorant havoc on a system that is running well without them. Maybe that’s what fuels this latest hubrstic hissy fit.

Austin Bay has the story here.

It seems that Michael Yon is being hassled by the brass – they are threatening once again to kick him out of Iraq. And it’s not the first time. Here’s AB’s report on his experience in the matter:

This is stupid. Michael Yon and Bill Roggio are the best out there. Telling Michael Yon to exit the theater is the WWII equivalent of telling Ernie Pyle to quit filing dispatches.

Everyone knows the PAO system has never been much more than mediocre — I’ve met some very smart public affairs officers and non-coms, but the system is inadequate, at times inept. Now Yon says someone wants to kick him out of Iraq. Tut. At a Pentagon lunch last fall General Pace mentioned to me the importance of milblogs. I then told him the word circulating the blogosphere was that the Army wanted to limit milblogs. Yes, there is an OPSEC argument, but read the milblogs. The soldiers posting know about OPSEC.Pace told me he would look into the rumor. No, I never heard back.[emphasis mine — D]

I suggest that General Pace look into this report from Yon.

I second the suggestion. As Colonel Boyd would say to his protegés, “do you want to do something, or do you just want to be a general?” Which is just one of the reasons that Colonel Boyd remained a colonel. But his strategy and tactics will remain pertinent to the conduct of war for generations to come. Meanwhile, pissy generals continue to throw their weight around and then, damage done, they will be gone…sans accountability. ‘Twas ever thus.

Click on Austin Bay’s link to read the punchline from Michael Yon.

Fox has posted what appears to be an introductory passage to the book Michael Yon must be hammering out during his time as a warrior-with-camera. 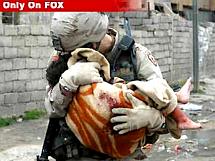 They also have up the iconic image from several years ago of that Army major holding a dying Iraqi child, rushing her to the medics even as her life’s blood begins to ebb, soaking through the all-too-mortal blanket wrapped around her. That picture remains one of the most moving images of Iraq.

Yon writes honestly. He is a lyrical photographer. We compare him to Ernie Pyle but he’s more, much more than Pyle. For one thing, he was a Green Beret himself before he traded his weapons for a camera. For another, he was a reluctant correspondent in the beginning. And a third thing: he had no financial backing except his own funds and the donations he received from family, friends, and the internet. Fourth, and not least, he tells us when things are not going well – as in some of his reports from Afghanistan.

Michael Yon is not, and likely never will be, a card-carrying member of the MSM. When the war is over, it will be he (and Roggio and Totten) rather than the reporters huddling in the safety of the Green Zone whose words will be remembered. His images will bear testament in the future to what happened in a way no words ever can.

Bill Roggio has followed in his footsteps, though with more to lose: he has a family and children to provide for. But he writes well and is a magnificent citizen for being willing, like Yon, to step into the vacuum that a lack of honest reporting has left in Iraq.

Michael Totten has been a saving grace also. He writes from Iraq now, but he has covered so much. His reports from Lebanon – back when parts of it were briefly places of hope – green banners flying.

Their reporting makes you wonder what the outcome of Vietnam might have been had we the likes of Yon, Roggio, and Totten on the scene, telling us the real story.

But back then we had no precedent for Vietnam. The death-driven, self-hating elites of post-WWII had not yet come into power in Congress and academia. They met over Vietnam and they destroyed millions upon millions of people. The Killing Fields are ultimately their responsibility, as is the killing that continues in Vietnam. Those immaculately groomed academicians and political hacks, whose hands have never touched blood, are far more dangerous than the phantoms they created and that they believe in – like Dr. Strangelove, for instance.

The Yons and Roggios and Tottens are the Davids against the giants like CNN, the New York Times, and Fox. When one of the Goliaths pays at least a modicum of respectful attention, you know the media is feeling a bit shaky.

Go here for Yon’s latest post, which begins by quelling rumors that he’s “selling out” because of the Fox Report. From Baghdad he begins:

Recent mention of cooperation with Fox News kicked rumor into high gear, leading some long-time readers to lament my “selling-out” to a major outlet. Simultaneously, thousands of new readers via the Fox website have little idea why my work suddenly is featured there. This dispatch will hopefully quell both concerns. My website and Iraq coverage remain independent of all financial support save that of my readers.

Especially click on the site to see the picture he has of a decidedly metrosexual young anti-war demonstrator. The image is made less disturbing when you read Yon’s caption and summary judgment — Some people just grow up protesting, starting maybe by not cleaning their rooms. A pertinent dismissal.

Bill Roggio’s report on the first month of the new battle plan in Iraq is hopeful:

The Baghdad Security Plan is now over one month old since its official announcement on February 14. While it is impossible to judge progress over the course of one month in a complex battlespace such as Baghdad, the initial signs are encouraging. Sectarian murders, the fuel for the potential Sunni — Shia civil war, have been dramatically reduced. Before the beginning of the operation, Scores of bodies were found executed daily, now the number is in the single digits. Massive car bomb attacks, which in the past have killed dozens and wounded hundreds, have been reduced.

While the number of car bombings has increased, their effectiveness has decreased.

There have been few changes to the disposition of forces inside Baghdad over the past week. The 4th Brigade, 1st Infantry Division completed its deployment to Baghdad, and spread its four battalions into the Bayaa, Mansour and Doura districts. General David Petraeus announced an additional Combat Aviation Brigade will deploy to support operations. The deployment of the aviation brigade is being sped up by two months. Again, the U.S. Army still has an additional three combat brigades preparing to move into Iraq, and the deployment of the last brigade will not be complete until June. [my emphasis — D. The aviation brigade will have a telling effect once it is fully deployed. This can only help morale and effectiveness]

By the way, Bill has a daily report on Iraq. It is linked from his blog to where it appears in The Weekly Standard. Here is today’s edition

Go to Michael Totten’s essay on the new Iraq –the Kurds’ progress in the north as the other factions in the south continue killing one another. The Kurds’ initiative and productivity are so at odds with the rest of the country. But by now, if you’ve read Gates of Vienna long enough, you know it’s genetic.

Totten, like other westerners who meet the Kurds, are drawn to them. Our own correspondent in Mosul, while concerned with the Kurdish persecution of the Yezidis, still found himself drawn to them:

As for the Kurds themselves I cannot deny my affinity for them. They’re hard working (relative to Arabs) and ambitious, and everyone loves the underdog especially when he’s making the big comeback.

ERBIL, IRAQ – What a difference a year makes.

Fourteen months ago I flew to Erbil, the capital of Iraqi Kurdistan, from Beirut, Lebanon, on the dubiously named Flying Carpet Airlines. Flying Carpet’s entire fleet is one small noisy plane with propellers, cramped seats, and thin cabin pressure. Only nineteen passengers joined me on that once-a-week flight. Everyone but me was a Lebanese businessman. They were paranoid of me and of each other. What kind of crazy person books a flight to Iraq, even if it is to the safe and relatively prosperous Kurdistan region? I felt completely bereft of sense going to Iraq without a gun and without any bodyguards, and it took a week for my on-again off-again twitchiness to subside.

Last week I flew to Erbil from Vienna on Austrian Airlines to work for a few weeks as a private sector consultant with my colleague Patrick Lasswell. This time I didn’t feel anything like a fool. Almost half the passengers were women. Children played on their seats and in the aisle with toys handed out by the crew. We watched an in-flight movie and ate the usual airline lunch fare served by an attractive long legged stewardess. The cabin erupted with applause when the wheels touched down on the runway. The pilot announced the weather (sunny and 60) in three languages and cheerfully told us all to have a great day. Have a great day may seem an odd thing to say to people who just arrived in Iraq, but this is Kurdistan.

Like our anonymous correspondent last month, both Totten and Yon have done pictorial essays on the Yezidis. This new essay by Totten is full of compelling images from Kurdistan – colorful, exotic, and hopeful. One can’t help but cheer them on, even while keeping an eye on what they’re up to vis-à-vis the Yezidis and the Assyrian Christians – those miracle survivors in the face of Islam.

Although I am careful to refrain from using Yon’s images without permission (I received it for the Yezidi story last month), this screen cap from Fox is probably within acceptable parameters. If that turns out not to be the case, I will remove it. One doesn’t take for free the work of an artist. As the wife of an artist, I am aware how frequently that can happen — and how offended people can be when called on it.

2 thoughts on “The Valiant Word Warriors: Roggio, Totten, and Yon.”