To (finally) launch our PJ Media straw poll widget — which allows you to vote right here on Gates of Vienna — I’m beginning my series of posts on the candidates with a brief look at Rudy Giuliani. At the moment he is leading the pack. Of course, members of Pajama Media are overwhelmingly conservative (and the few liberal contributors get a great deal of flack for being traitors) so the vote is skewed. But that’s okay: I’m interested in what candidates conservatives consider seriously.

Be sure to take advantage of the PJ “widget” the Baron installed on the sidebar. You may only vote once a week — and they can catch you if you cheat — but if you’re so inclined, register your opinion. Hey, it’s a way for non-citizens to have a say in the polls for a change!

And you can even cast a vote for candidates in both parties.

City Journal’s Steven Malanga has a long and detailed look at Rudy Giuliani as possible “presidential timber.” He doesn’t merely rehash the astounding leadership that Mr. Giuliani provided during 9/11, he also presents a lot of material on the near-miraculous turnaround that New York City experienced during Giuliani’s term as mayor. There really hasn’t been another example of leadership of this caliber at any level of government in a long time — as Malanga says, “not since Teddy Roosevelt…” 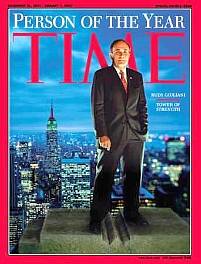 The common wisdom is that Mr. Giuliani will never gain the Republican nomination because of his liberal social agenda on issues like abortion. I think the common wisdom is wrong. While I don’t find Rudy Giuliani’s social philosophy congenial to my way of thinking, I find his style of leadership more palatable than that of anyone on either side of the aisle.

Governors often make good Presidents. Senators usually don’t get elected. We haven’t had a mayor in my lifetime and the idea is appealing. Being mayor of New York City and managing to make it a liveable place again takes more talent than anyone I’ve seen so far. Some of the programs he put in place, especially with the police force, continue today.

In New York, where generations of liberal policy had produced a city in which one in seven citizens lived off government benefits, in which lawbreakers whose actions diminished everyone else’s quality of life were routinely ignored or excused, in which the rights of those who broke the law were often defended vigorously over the rights of those who adhered to it, Giuliani’s prescriptions for an urban revival based on shared civic values seemed unrealistic to some and dangerous to others. The head of the local American Civil Liberties Union chapter described Giuliani’s ideas on respect for authority and the law as “frightening” and “scary.” But New Yorkers who had watched their city deteriorate were more frightened of life under an outdated and ineffective liberal agenda. Giuliani rode to victory in 1993 with heavy support from the same white ethnic Democratic voters who, nearly a decade earlier, had crossed party lines even in liberal New York to vote for Ronald Reagan.

To those of us who observed Giuliani from the beginning, it was astonishing how fully he followed through on his conservative principles once elected, no matter how much he upset elite opinion, no matter how often radical advocates took to the streets in protest, no matter how many veiled (and not so veiled) threats that incendiary figures like Al Sharpton made against him, and no matter how often the New York Times fulminated against his policies. In particular, offended by the notion that people should be treated differently and demand privileges based on the color of their skin, Giuliani was fearless in confronting racial extortionists like Sharpton. Early in his tenure, he startled the city when he refused to meet with Sharpton and other black activists after a confrontation between police and black Muslims at a Harlem mosque. And though activists claimed that Giuliani inflamed racial tensions with such actions, there were no incidents during his tenure comparable with the disgraceful Crown Heights riot under Dinkins, in which the police let blacks terrorize Orthodox Jews for several days in a Brooklyn neighborhood.

For Giuliani, the revival of New York started with securing public safety, because all other agendas were useless if citizens didn’t feel protected. “The most fundamental of civil rights is the guarantee that government can give you a reasonable degree of safety,” Giuliani said. He aimed to do so by reinstituting respect for the law. As a federal prosecutor in New York in the 1980s, he had vigorously hunted low-level drug dealers—whom other law enforcement agencies ignored—because he thought that the brazen selling of drugs on street corners cultivated disrespect for the law and encouraged criminality. “You have to . . . dispel cynicism about law enforcement by showing we treat everyone alike, whether you are a major criminal or a low-level drug pusher,” Giuliani explained.

As mayor, he instituted a “zero tolerance” approach that cracked down on quality-of-life offenses like panhandling and public urination (in a city where some streets reeked of urine), in order to restore a sense of civic order that he believed would discourage larger crimes. “Murder and graffiti are two vastly different crimes,” he explained. “But they are part of the same continuum, and a climate that tolerates one is more likely to tolerate the other.” He linked the Dinkins era’s permissive climate, which tolerated the squeegee men (street-corner windshield cleaners who coerced drivers into giving them money at the entrances to Manhattan), to the rise of more serious crime. “The police started ignoring all kinds of offenses,” Giuliani later recounted of the Dinkins years. They “became,” he deadpanned, “highly skilled observers of crime.”

Back then, New York City was indeed a rotten place to live. A friend of mine, tired of being robbed (it happened on three separate occasions in different parts of the city), took up martial arts in order to prevent further attacks from succeeding. He became so proficient that he eventually was made an instructor. But then he moved to peaceful Virginia and hasn’t had to punch anyone out since he came here.

There was a time I wouldn’t have visited New York City because of the crime. But we did go, several months after 9/11, when Ground Zero was still smoldering. We even stayed in the once-upon-a-time no-go zone of Times Square, which had been cleaned up and was once again full of tourists. We walked around town without fear and enjoyed the crowds and diversions. That was during Giuliani’s reign, of course, and his handiwork was obvious.

It’s a long time till the conventions and the air will be full of the deadly fumes of bloviating politicians. However, Gates of Vienna will post only occasionally until we get near to election time.

Meanwhile, try out the straw poll widget on the sidebar.