There was another big anti-war rally today in Washington DC, and an anarchist website tipped its hand by announcing that they intended to vandalize the Vietnam War Memorial as part of the action, as they did earlier with the Capitol building.

Free Republic responded by organizing a massive counter-protest of Vietnam vets and other patriotic volunteers in order to protect the memorial. I made the long drive up early this morning to report on “A Gathering of Eagles” for Gates of Vienna.

Note: each of the following photos is a thumbnail. Click the small image to see a larger version of the same thing. 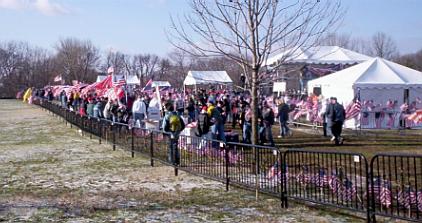 After a long walk down from the Metro station at Farragut West, I expected the area on the Mall around the Vietnam Memorial to be crowded with lefty demonstrators. But it wasn’t — apparently the moonbats like to sleep in. But the veterans were out in force; I saw a heartwarming combination of Rolling Thunder people, Patriot Guard Riders, and VFW representatives of various ages crowding their counter-demonstration area next to the memorial.

It was very cold and blustery with occasional snow showers, and the veterans’ area soon became a sea of icy mud. But that didn’t dampen the spirits of those who came to protect the memorial. I talked to people who had come in from California, New York, Florida, Texas, and many other places across the country.

Those who wanted to visit the memorial wall had to wait in one of two very long lines in order to be X-rayed and wanded for dangerous contraband. I spent an hour in the cold with a lot of veterans, and directly in front of me was a disabled veteran in a wheelchair, accompanied by his wife.
– – – – – – – – – –
Even though he was bundled up with a hat, coat, gloves, and a lap blanket, the poor guy was obviously very cold — you could see his arms shivering.

Next to him was a family, a husband with his wife and teenage son. The wife took off her coat to drape over the disabled vet’s shoulders.

The family continued to chat with the vet and his wife, and I noticed the woman was very well-informed about the Great Jihad, and also the enemy within. At one point she said, “You know, we had to throw Islam back once before at the gates of Vienna.”

She agreed that she had, so I told her, “I’m half of the blog Gates of Vienna.”

I was in deep cover — I had no flag or other insignia identifying me as a member of the VRWC — so I headed up to the Lincoln Memorial to investigate the demonstration.

Signs for ANSWER and the Socialist Workers were everywhere, as were Cuban and Palestinian flags. There were plenty of Latin Americans and Muslims present, judging by appearances. The music over the loudspeakers seemed to alternate between anti-war standards (“War! HUH! What is it good for?”) and salsa numbers. 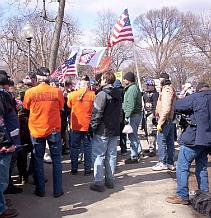 The Rolling Thunder guys stood shoulder to shoulder across the walkway that leads to the memorial, and refused entry to any of the demonstrators who tried to get in. I was standing next to one of the vets when a woman carrying a peace sign and pulling a suitcase on wheels wanted to get past us.

“Excuse me,” she said, with a thick European accent.

“What do you mean?” she exclaimed in outrage. “This is America! You can’t stop me going in there.”

“Oh, yes I can. Go back down there —” he pointed towards the Lincoln Memorial — “that’s where you’re wanted. And we’ll stay down here.”

He never did let her get by.

There were several DC cops opposite the vets, watching impassively from across the sidewalk next to Constitution Avenue. I asked one of them if the checkpoint was OK with him. He shrugged. “They’re not blocking the sidewalk. That’s all I care about.”

The demonstrators were now arriving by the busload and massing on the lawn by the Lincoln Memorial. Their plan was to cross Memorial Bridge and march a mile and half to the Pentagon. There was no way I was going out over the Potomac in those temperatures and with a stiff wind blowing, so I decided to head back towards the Metro. 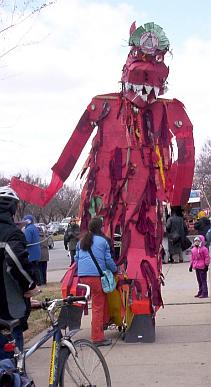 The last thing I saw before turning to walk up the hill was this very peculiar icon or totem. It was being wheeled up the sidewalk by one woman while two others held ropes and struggled to keep the wind from blowing it away. It seemed unlikely that the monstrosity would ever make it across Memorial Bridge intact.

After I left DC, some of my TV-owning sources told me that CNN had lavish coverage of the anti-war protesters, but no footage of the veterans. CNN reported that there were “about two thousand counter-demonstrators”, but don’t believe them — early in the morning, when the vets met at their staging area, I saw considerably more than that. I heard that they fanned out across the city later on to place a protective cordon around all the major monuments.

God bless those veterans! They renewed my spirit.

I’ll have more to report on these events later, when I have more time.

25 thoughts on “Gathering With the Eagles”