Yesterday the Baron trudged through the cold in Washington, talking to veterans and families, witnessing various acts of kindness among strangers, and seeing determined patriotism when it came to protecting the Vietnam Memorial. Given the fact that this demonstration of protection came together by word-of-mouth and internet organizing only, it is amazing that so many people from all over the country were able to show up.

Don’t believe the MSM — either their lying by entirely omitting any mention of the numbers of people attending the Gathering of Eagles, or their deliberate playing down of the numbers who did come. The Parks and Service people counted thirty thousand patriots gathered to protect the Wall.

I searched Fox News this morning and couldn’t find even a mention of yesterday’s event. Their pictures of the week in review featured such momentous occasions as a woman spraying her dog green for the Saint Patrick’s Day parade. Less than twenty-four hours later and the Gathering of Eagles is already down in the memory hole. In their defense, at least for today, they also ignored the well-engineered Moonbat Mingle further down the way, including the march on the Pentagon. No doubt the leftie blogs have their own pictures of derring-do against the evil country in which they are forced to live. I often wonder why more of them don’t simply emigrate to, say, the socialist EU. I also wonder why so many of the moonbats were Mexicans, protesting against their country of choice.

Whatever. The “we-report-you-decide” motto of Fox is certainly hollow. The Baron is right: in order to get any semblance of truth, we need a new order of journalism, one which lacks the narcissism and triviality of what is currently on offer. Who gives a damn what Brittney Spears thinks? Or that she is even capable of cerebration? What does she, or others in the entertainment circus, have to say that we would want to hear?

While the Baron was in the midst of the scene in Washington, asking questions and taking pictures, the future Baron and I were elsewhere: we went to a Gathering of Eaglets in Farmville, VA. 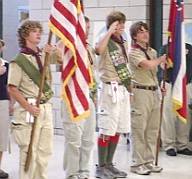 It was the annual fund-raising dinner for the Heart of Virginia Boy Scouts’ Council, District 60. Ironically — when you think about the MSM phobia noted above — the speaker was a retired television journalist, Jim Kincaid. He talked of his rural upbringing in Kansas, and the experience of earning his Eagle Scout badge. The Peabody awards and other achievements he earned in his career in media never came close to the sense of pride and success he felt at his Eagle Scout ceremony.

The fund-raising dinner was held in the National Guard Armory. Going in, I noticed the sign which said the Farmville Guard had served in Omaha Beach and Iraq. I wished I had the camera at the time, to capture this image of the baton being passed. However, the Baron had taken it to the Gathering of Eagles so the night went by without any pictures from us. I didn’t think to ask any of the camera-wielders inside the armory to email some images to us. Maybe it was the Scout food we were served that distracted me from thinking ahead.

Some interesting features of this “Friends of Scouting” fundraiser: the number of men who stood up when they asked for a count of Eagle Scouts. For all of them, it was a defining moment; I was reminded of the elderly Episcopal priest who attended the fB’s Eagle ceremony in 2003. Father Weatherly’s Eagle badge was pinned proudly beneath the white collar of his adult ministry. Did this achievement lead to his calling as a chaplain in the Korean War? Or to his service in World War II? Or to his son’s following in his footsteps in the military and the ministry?

The Boy Scouts are one hundred years old now. And some of the people there nearly matched it in age. In a state known for its slave-holding history, the crowd last night had its fair share of black men of all ages. In fact, the fB and I gave a ride home to a man of 93. He still drives, but not at night. And given the far reaches of District 60, we were the nearest family on his route home. It was probably eight miles out of our way, and as we rode to his house, he told an old man’s stories of being in New Guinea during the war, of prospering after he came home — he owns a great deal of valuable land in our county — and of the achievements of his children. Now he numbers among his grandchildren several lawyers and doctors, though he slyly noted the propensities of lawyers and laughed.
– – – – – – – – – –
So we had our local gathering of eaglets while the Eagles gathered in Washington D.C. We carried home pledge cards and brochures and car decals. We also came away with the knowledge we were contributing to the good. Not just talking about it, but doing something important. Just like the Eagles at the Wall.

Here are some Boy Scout statistics to consider:

And in a recent National survey of Scouts, former Scouts and adult volunteers, these were some of the results seen —

Want to do something meaningful and lasting for the future generation? Join the Scouting family. You don’t need to be a Scoutmaster, or give great amounts of time you don’t have. There are needs you could meet in a few hours a month or even a few hours a year.

For example, volunteer your expertise to help boys earn their badges. When the future Baron wanted to earn his badge for Personal Management (Eagle requirement), he worked with a local banker who was willing to spend some hours with the fB helping him develop his ability to manage his finances and plan for future spending.

When he needed help with his Bird Study badge, a local amateur bird watcher helped him acquire that one. As a result, the future Baron can identify almost any bird with just a glimpse, differentiating males and females. He knows the nesting habits, the shapes and sizes of nests, the egg shapes and number of eggs usually hatched by a given species of bird. He can recognize the bird songs — I know, I often ask him to tell me what I’m hearing when we do yard work. The field glasses he used still hang by the kitchen window so we can spot the various birds that flit through the yard.

Obviously, he could tell you far more about his experiences than I will ever know. But as a mom, one memory stands out particularly. The fB was fearful of being alone in the woods, particularly at night. As a middle-schooler, this fear was shameful to him, but there it was, lodged deep in his character. He knew if he was to achieve membership in the Order of the Arrow, which is the national honor society for Scouts he would have to do exactly the thing he most feared: spend a night alone in the woods, separated from other young Scouts who were going through the same experience. So on a cold weekend in early March, he did it. He persevered through that long night and he came home proudly wearing his new white sash with the bright red arrow. For him, perhaps, it was even more of a milestone than the Eagle badge. To earn his Eagle, he had to slog through the many requirements. However, to become a member of the Order of the Arrow, he had to face his greatest fear and transcend it.

To see where you can donate your time one-on-one, or with a group, go here, to the merit badge page. You’ll be surprised to find that you do indeed have something to give.

Not all of us can go to Washington, D.C. to guard the Vietnam Memorial from those who would dishonor our dead. Nor can we march off to war — even if the military would take the tattered brigades we would make. But each and every person reading this post can give a little time to boys; each of us can contribute to our future generation of men.

The boys of today are an endangered species. They need your help.

6 thoughts on “A Gathering of Eaglets”