Charles Martel, who runs a website called Laughyourheadoff.org, sent me an email this morning.

Laughyourheadoff.org is announcing today the winners of the first International Islamic Cartoon Contest. It comes on the day a French magazine is going on trial for publishing cartoons.It just so happens that our winning entry is from Denmark!

Once the Jihadi Internet brigades see our winning pictures, they will take our site down: PLEASE post these three winning pictures on your blog or website and consider publishing the press release for the event. We are hoping the MSM does not censor or news this time, and you can help make sure the public sees these winners.

We are fighting for the survival of our civilization, and art plays its part! 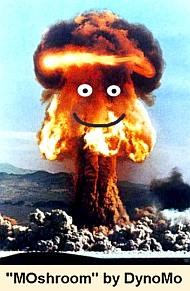 I won’t post all of the winning entries here; otherwise, what reason would anyone have for visiting Laughyourheadoff.org?

The Danish entry, which won in the “Clintonian Category”, is quite amusing. My personal favorite is “MOshroom”, shown at right. It was the winner in the “Satanic Category”.

Charles Martel (who uses a pseudonym because of ongoing death threats by Islamists) is also running a poetry contest, the Asma b’Marwan Poetry Prize: “A Call To Poets Supporting Free Speech”.

We’re launching this literary contest to bring attention to the plight of Danish cartoonists who live in hiding for fear for their lives because they exercised their freedom of expression, and we’re calling for poets and artists to speak out for intellectual freedom.

Most people don’t realize that Mohammed ordered the murder of a poet who poked fun at him and then sanctioned the stabbing of Asma b’Marwan because she dared to criticize such crimes with her own poetry.

Just like Mohammed praised the assassin who butchered Asma one night while her 5 children watched, there are fanatical Muslims who agree with the call for death against the 12 Danish cartoonist because of so-called “blasphemy” against their prophet.

The poetry contest follows the declaration last week of the Manifesto Against Terror, which was signed by well-known European artists and intellectuals, some of whom are also in hiding because of Islamic death threats. The Manifesto, which is gaining signers worldwide, declared:

“We reject ‘cultural relativism’, which consists in accepting that men and women of Muslim culture should be deprived of the right to equality, freedom and secular values in the name of respect for cultures and traditions. We refuse to renounce our critical spirit out of fear of being accused of ‘Islamophobia’, an unfortunate concept which confuses criticism of Islam as a religion with stigmatisation of its believers.”

If anything, the climate and support for free speech in the defense against Jihadist propaganda and pressure in Europe and the US is worse than last year,.

Look at the bizarre and dangerous trial, starting today, brought against the French magazine Charlie Hebdo for merely printing cartoons in a free nation!

Reporters Without Borders has expressed “unconditional support” for the magazine:

By publishing the cartoons, Charlie Hebdo chose to resist the attempt to impose silence by means of threats. This is what counts. The public arena must remain free.

Swedish reader LN wrote us this morning with this news about Charlie Hebdo: 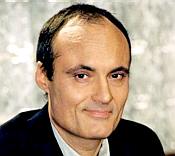 According to Danish Radio 1215 CET, on entering the court this morning Charlie Hebdo editor Philippe Val said, “If necessary I will raise heaven and hell in this case.”

Some of our readers are in the habit of proclaiming that “Europe is lost”; others can see new resistance stirring within the somnolent salons of Old Europe.

3 thoughts on “Laughing It Off”