Note: Any of the small images shown below that cause your mouse pointer to display the “link” icon may be clicked to show a larger version of the same image.

The Christian Action Network recently made another aerial run over a Jamaat ul-Fuqra compound, this time the one near Commerce, Georgia. Martin Mawyer, the president of CAN, has kindly made the resulting photos available to Gates of Vienna.

The compound on Madinah Road actually has a Royston address, and is about halfway between Commerce and Royston, to the northeast of Atlanta.

Jamaat ul-Fuqra — the terrorist organization whose cover group is known as the Muslims of America — means “community of the impoverished” in Arabic. When you look at the dwellings in the Commerce compound, it seems that the organization is trying to live up to its name.

Most of the residences are trailers and double-wides, some of them decrepit and badly in need of repair. Squalor of this level is not unknown in the rural South, but the Commerce compound definitely ranks near the lower end of the socio-economic scale.
– – – – – – – – – – 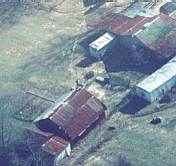 There is a small farm complex that probably predates the MOA acquisition of the property. It seems to be engaged in some kind of animal husbandry — cows? horses? Presumably not pigs.

The pasture and larger trees standing in the open indicate that the farm has been there for a while. The rest of the buildings and trailers are more obviously recent additions, set back in the woods along the narrow red-clay access roads that snake through the complex.

The impoverishment of the Impoverished does not seem to extend to motor vehicles. There are plenty of cars and trucks visible throughout the compound, and not just at the large building.

The double-wide shown at right has at least ten vehicles parked around or in front of it. Most of them were turned around when parked so that they are facing back up the driveway. Just for convenience? Or for a quick getaway?

There are a couple of hood-tarps in evidence on vehicles. It could be that the car’s hood is missing, and the engine is being worked on. Or maybe the car’s owner is trying to protect the engine and battery against those harsh Georgia winters.

Or maybe the tarp is there to conceal the front license plate from casual inspection if a county deputy comes down the road on a professional visit. Would he be required to show a warrant if he wanted to look at the rear license plate?

As I mentioned yesterday, members of Jamaat ul-Fuqra have defended their organization in letters to the editor of a local newspaper in Charlotte County, Virginia:

We are not terrorists, nor do we or shall we ever subscribe to terrorism. We are American citizens born and raised in the United States, respectful to God and the Constitution of the founding Fathers of this country. Many of us are Veterans ourselves, honorably discharged, by the various entities of the United States Armed Forces. Some of us currently have relatives serving in the Armed Forces overseas in Iraq.

These are fine sentiments. But contrast them with the words of the letter-writer’s own leader and spiritual guide:

In a videotape obtained by The Washington Times, Sheik Gilani calls on American Muslims to help him form an “international organization.”

“We have reached out and prepared them to defend themselves in a highly specialized training in guerrilla warfare,” he says, referring to two camouflage-clad black men flanking him. “Life is becoming more hard for Muslims. Therefore, every man and woman will learn to defend himself or herself.”

Another JF member also wrote to the paper:

The provocative tactics instigated by some members of CAN resemble events that led to the sad memories of Ruby Ridge and Waco. We are hopeful and pray that this venom of hatred never finds it’s [sic] way to Charlotte County, Virginia.

It seems obvious to me that the Madinah Road compound near Commerce is preparing for another Waco. Waco is now the gold standard for confrontations between private armed groups and the government. Any scrutiny of a group’s behavior “invites another Waco”.

Unfortunately for all of us, Janet Reno did for legitimate law enforcement what Joe McCarthy did for legitimate anti-communism. Thanks to Janet Reno, federal authorities are going to tread very, very softly with any group like Jamaat ul-Fuqra, particularly when a racial angle is involved. Law enforcement at the national, state, and local levels will bend over backwards to give the Muslims of America the benefit of the doubt, and then some.

So no new Waco is coming down Madinah Road to the Fortress. It’s not going to happen.

And the comparison of Jamaat ul-Fuqra with the Branch Davidians is spurious. David Koresh’s people did not operate compounds all over the country and in Mexico, Canada, and the Caribbean, “villages” in which they stockpiled automatic weapons and gave weapons-training courses to young men recruited from prison. The Branch Davidians did not fire-bomb Hindu temples nor murder members who failed to follow the proper doctrine. They never engaged in massive welfare fraud as a fund-raising measure, nor did they repatriate their ill-gotten gains to a terrorist in Pakistan.

These are apples and oranges.

But my purpose here is not to stimulate some government action vis-à-vis Jamaat ul-Fuqra. I don’t think the government can help us, anyway. We’re on our own.

My goal is to present information, as much as possible. Let the light shine on the Muslims of America — if they are peaceful and harmless devotees of their Sheikh, they will surely welcome the attention.

They have been accustomed to gliding through the shadows, unnoticed by the vast majority of Americans. We want them to move out into the light.

Well, I was wrong. I scoured through the aerial photos and found another shot taken from a very slightly different angle, and you can clearly see the piece of equipment on the ground in the barnyard. The roof of the barn is damaged, with some tin missing and the joists poking out, so that an optical illusion is created making the wheeled device look like it’s on the roof.

I still don’t know what it is, but at least it’s on the ground, where it belongs.

22 thoughts on “Jamaat ul-Fuqra in Georgia — From the Air”