This evening just after dusk the Christian Action Network organized a demonstration at Charlotte County Courthouse. They were protesting against the official county approval of a road named for a known terrorist, Sheik Gilani, the founder of the Muslims of America and Jamaat ul-Fuqra. The event was scheduled just before a Board of Supervisors meeting.

I got there early while it was still light so I could take some photos of the area. Charlotte Courthouse is one of the more beautiful locations in the Commonwealth of Virginia, scenic and historic — the home of Patrick Henry — without being overrun with boutiques and tack shops like a lot of other “old towns” are.

While I was waiting I chatted with a local businesswoman, who said she was appalled by the name “Sheikh Gilani Lane”.

She wondered why the FBI couldn’t do something about the Red House compound. I reminded her that this is a free country, and that unless someone there did something overtly illegal, there wasn’t much that law enforcement could do.

She gave a reluctant assent, but added, “You know, this country is really getting kind of screwed up.” 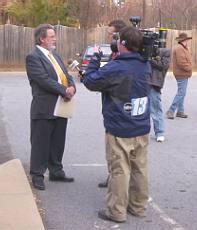 The Christian Action people gathered at Mimmo’s Restaurant just down the road from the Courthouse to eat and prepare for the demonstration.

The media showed up in full force, and Martin was interviewed a couple of times in front of the restaurant before he could eat his dinner.

The demonstration was not at the Courthouse itself, but just down the road in front of the County Administration Building, since that is where the Board of Supervisors meets.

I got there early, while the TV crews were setting up, and spent some time talking to the counter-demonstrators who were already there in anticipation of the arrival of the Christian Action Network. The TV people took footage of them while they were waiting. 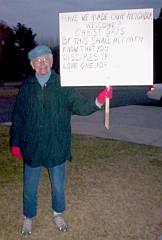 One lady carried a sign that read, “Have we made our neighbor welcome? Christ says that by this shall all men know that you are my disciples if you have love for another.” She told me that she was feeling like a young picketer. I remarked that she didn’t really look like a hippie. She replied that she thought there was a little hippie in her.

The state police were there to make sure no one got out of hand (no one did).

I chatted for a while with a representative of the state police. When I told him I was a blogger, he asked me which one.

“Gates of Vienna,” I replied.

“Well… yes, I’m associated with them.”

It turns out that he is a regular Gates of Vienna reader, and has been keeping up with the Jamaat ul-Fuqra news. He had even read today’s post. Hooray for the state police! Christine from the 910 Group was one of the demonstrators, and went over to introduce herself to him. 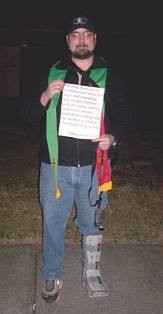 I had a long discussion with a local Presbyterian minister, whose sign displayed a passage from Ephesians about the neccessity for giving up anger and focusing on love. He felt that the protest was doing injustice to their peaceful Muslim neighbors. He knows people in the compound; he’s met with them, eaten meals with them, and coached their children. They’re peaceful, decent, people, and the demonstrators have no right to judge them when they don’t even know them.

When I confronted him with Sheikh Gilani’s own words, he said that his friends in the compound think the Sheikh was being taken out of context.

Well, consider this, from a recruitment video:

In a videotape obtained by The Washington Times, Sheik Gilani calls on American Muslims to help him form an “international organization.”

“We have reached out and prepared them to defend themselves in a highly specialized training in guerrilla warfare,” he says, referring to two camouflage-clad black men flanking him. “Life is becoming more hard for Muslims. Therefore, every man and woman will learn to defend himself or herself.”

Must have been some context. 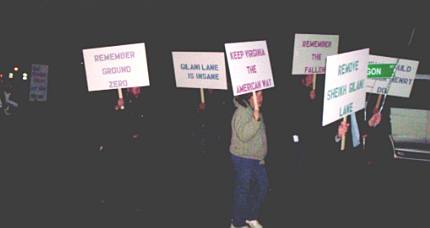 The demonstrators arrived, led by a CAN member dressed as the Statue of Liberty, with another young man leading the chants with a bullhorn. “Sheikh Gilani out of the county!” and “Gilani Lane is insane!” are two that I remember. 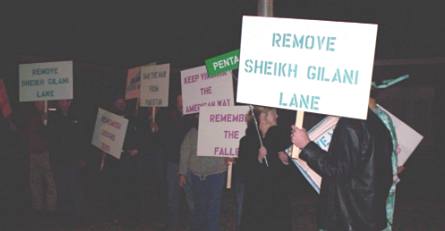 The demonstrators circled the complex several times while the media milled around getting video footage and interviewing people. 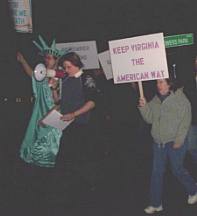 Another 910 Group member was interviewed at length while I eavesdropped, and she did an excellent job, speaking very clearly and articulately about the issue of Jamaat ul-Fuqra. You may have seen her if you were watching the 11 pm news on ABC13 out of Lynchburg.

At least one of the demonstrators was a local Charlotte County resident, a six-year veteran of the military who said that he had to come and speak out against the naming of the road.

A final gathering in front of the building, a big round of applause, and then the demonstration broke up.

The Board of Supervisors knew that CAN was coming, and the had hastily rearranged their schedule to meet for a moment at 7:00 pm, adjourn, and reconvene a little later at a local school, where no demonstration would be allowed. I assume they thought that by this stratagem they could duck all the adverse publicity.

But by absenting themselves so thoroughly from the scene, they made sure that Martin’s folks and the 910 Group people got most of the talking-head time on the news, without a single official representative of Charlotte County on camera.

I’m not a media-savvy person, but given the indefensible case they have to try to make, this doesn’t seem to have been a very wise move on their part.

4 thoughts on ““Gilani Lane Is Insane!””