From The Florida Times Union, reporting on the occasion:

Why is Christianity being singled out for special exclusion?” asked D’Souza, whose books include “Letters to a Young Conservative” and “The Enemy at Home: The Cultural Left and Its Responsibility for 9/11.”

He contended Nichol was wrongly “driven by this idea that Christianity and its symbols are in some way offensive.”

Holmes noted that the chapel, built as an Anglican place of worship in 1732, did not even have a cross until about 1940.

Protestants, concerned about idolatry, used to be averse to having crosses in church, he said. The cross was transferred to the chapel while a local church was being renovated and has remained at the school.

“I am baffled to hear critics insist the altar has to have a cross,” said Holmes, who specializes in subjects including American religious history and architecture and worship.

D’Souza argued that the issue is not about historic authenticity.

The cross, he said, fits in with the William and Mary’s Christian heritage. The school was chartered in 1693 as an Anglican institution with a mission that included training ministers.

He also said Nichol had no right to act unilaterally, without consulting the broader college community, including students, parents, faculty and alumni.

Holmes pointed out that last week Nichol announced the creation of a committee that will study the issue, although he said he would be surprised if the committee were to recommend that the cross be displayed permanently, given the increasingly diverse religious backgrounds of the student body.

Holmes also said that William and Mary has been a public school since 1906 and the chapel is used for a wide variety of secular events as well as religious services.

Both men received loud applause from the audience, which included some students wearing hand-lettered name tags reading “I support Gene Nichol.” Because the chapel is so small, some people watched the debate on a closed-circuit television in a room nearby.

While the two men debated, about 20 people who want the cross to be returned permanently stood outside the chapel in the rain, holding a candlelight vigil.

“What kind of Christian would I be if I didn’t stand up for the cross?” said Karla Bruno, a William and Mary graduate who organized the vigil.

D’Souza initially had hoped to debate Nichol, who was out of the country when the original invitation to take part in the forum was issued. Holmes said he was participating in the debate on his own and not as a surrogate for the president.

The debate’s sponsors included the Intercollegiate Studies Institute, which typically arranges debates between conservative and liberal speakers at campuses nationwide, and The Virginia Informer, an independent student newspaper at William and Mary. 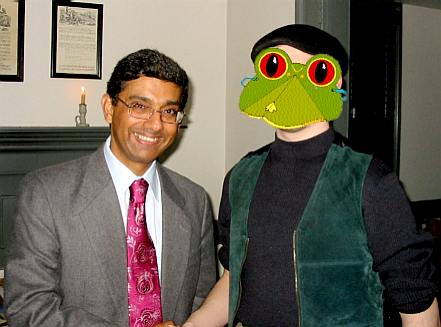 There was a reception afterwards, and the fB had his picture taken with Mr. D’Souza – whom, if you remember, was a rambunctious college conservative at Dartmouth some years ago.

The fB is pictured on your right, with some modification of his physiognomy – to bring it more into line with the Baron’s features.