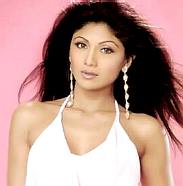 Shilpa Shetty, the actress pictured at right, is new to me, but she’s a big star in India, and has appeared in a number of Bollywood productions.

And now Channel 4 — the UK television network which broadcast the undercover mosque report earlier this week — is in hot water because of what happened on to Ms. Shetty on one of its television programs. It seems that the Indian actress was the victim of “racism” while she was a participant in the popular reality TV show, “Big Brother.”

It may well be time for Britain to apologize for its racist behavior towards India. According to this Fox News report:

LONDON — Tony Blair and Gordon Brown mounted a diplomatic offensive to protect Britain’s reputation in India and the sub-continent yesterday as a television racism row grew into an international crisis.

India threatened to make a formal protest about the racist bullying of the Bollywood star Shilpa Shetty on the reality show Celebrity Big Brother.

Effigies of the show’s organisers were burnt and in Britain there were 22,000 complaints to Ofcom. The Channel 4 program had become the most complained about in the broadcasting watchdog’s history.

Brown, who is on his first visit to India, described the comments on the show as offensive and condemned anything that harmed Britain’s reputation as a tolerant country.

So what was the awful racist insult that Ms. Shetty experienced at the hands of her bullying fellow contestants?

Three of Shetty’s housemates, including Jade Goody, her principal tormentor, are alleged to have taunted her because she is Indian, including making gibes about her cooking, suggesting that she was dirty, imitating her accent and asking whether she lived in a shack.

Shetty and Goody exchanged insults again last night after Goody accused Shetty of being a “princess” and thinking that she was better than others. Shetty replied: “Oh please, learn some manners. You know what you need? You need elocution classes, Jade.” Later, Goody said: “Go back to the slums and find out what real life is about lady.”

Before I get myself in trouble again, I must emphasize that I find the above comments boorish, tasteless, and unwarranted. But do they constitute a crisis in international relations? Should they be a casus belli between Great Britain and the former Crown Jewel of the British Empire?

Ms. Shetty is not some waif just in off the streets — she’s a big-time movie star with major resources and a wealth of experience in public relations. Can’t she just let this one roll off her back?
– – – – – – – – – –
Apparently not, and Tony Blair is right in there with her, ready to pick up the sword of St. George and slay the dragon of racism:

Blair said little initially. Questioned in the Commons, he said that MPs should oppose racism in all its forms. But after protests poured in he authorised a No. 10 statement saying that Britain would not tolerate racism in any way. His spokesman said: “What clearly is to be regretted and countered is if there is any perception abroad that in any way we tolerate racism in this country.

“What the response to the program has shown is precisely the opposite — that there is no level of toleration in this country for anything which, rightly or wrongly, is perceived to be racist. The message should go out loud and clear that we are a tolerant country and we will not tolerate racism in any way.”

There’s no First Amendment in Britain, and plenty of laws against racist speech, so I assume he intends to bring the full power of the state down on Channel 4. That will make a pretty picture, especially in the wake of all those sound bites on the same channel of hateful imams raging against the filthy Jews and kuffar.

Britain is only a generation or so away from the “wogs” and “fuzzy-wuzzies” type of humor in its public culture. Yet the government expects to cleanse the population of such atavistic sentiments all at once, by administrative fiat.

It would be laughable if Britain were not facing a looming cultural disaster at the hands of Islamic zealots. When sharia takes over on the nook-shotten isle of Albion, Ms. Shetty will no longer have to endure the slings and arrows of outrageous racists on reality TV, because there will be no more reality TV, and no more shameless infidel women in their scanty outfits.

The right to offend others is a cherished American tradition. I’m going to exercise it here once again, in an equal-opportunity fashion, by reprising a classic ditty from the Firesign Theatre, who answer the question What Makes America Great?

It’s candied apples and ponies with dapples
you can ride all day!
It’s girls with pimples and cripples with dimples
that just won’t go away!

It’s spics and wops and niggers and kikes
with noses as long as your arm!
It’s micks and chinks and gooks and geeks
and honkies (Honk! Honk!) who never left the farm!

And now here’s the renowned Yippie and gonzo musician Ed Sanders with the Johnny Pissoff Credo [I used to have a link for this, but it’s no longer extant]:

I, Jonathan Abner Tobias Pissoff, in the presence of the
Universal God of Salvation, do solemnly affirm that I’ve
been chosen to beat up queers! I further affirm that although
I’m a decent god-fearing man with family and propitty,
Wellll ah, Ah wanna kill-rape-ravage-plunder-pillage-stomp
devour-destroy-hack-smash-blast-blesh-and bash, heh-heh!
All queers, commies sheenies howlies and honkies
All greaseballs, mockies, pollacks, lepers and litvacks
All bohunks, eggheads, fudgesickles an’ high-slants
All poets, micks, frogs, queers, peace-creeps, cajuns,
Dwarfs, dipshits, an’ teenage loose women!
In the name of Jesus Christ, this I do affirm.

Are we offended yet?

16 thoughts on “Time for Britain to Apologize”