On January 20th, London’s mayor Ken Livingstone hosted a debate in the Queen Elizabeth II Conference Centre, across the street from Westminster Abbey, on “A World Civilisation or a Clash of Civilisations”. The jumping-off point of the debate was Samuel Huntington’s famous book, The Clash of Civilizations and the Remaking of World Order. The principal speaker besides “Red Ken” was Daniel Pipes, the noted author and a charter member of the Counterjihad. 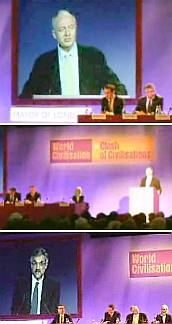 A contingent from the UK and Canadian chapters of the 910 Group was present and one of them, “Flyboy”, was videotaping the event. 910 Group member “Willy” has made the entire video available in seven parts on YouTube — see the bottom of this post for the links.

Red Ken spoke first, and gave a very urbane speech about the need for multiculturalism and a coming together of different cultures to form a “world civilization”. He referred repeatedly to the defects of the United States, and gave his opinion that the era of America as the premier global power is even now coming to an end.

Mr. Pipes expressed a strong disagreement with the mayor.

“The problem is not so much a clash of civilizations,” he said, “but a clash between civilization and barbarism… The ‘clash of civilizations’ idea fails; it does not fit the facts; it is not a good way to understand the world.” He went on to detail the dangers of the largest and most violent barbarism of all, radical Islam. He singled out Britain, and in particular London, as the world’s principal haven for Islamic terrorists.

I haven’t had time yet to watch all the other speakers; you’ll have to go to YouTube to hear the rest of the arguments. Mr. Pipes’ account of the event is here.

The MSM has been silent about this important event, so we all owe a debt of gratitude to the dedicated volunteers of the 910 Group for making the video available. Please pass the links around.

The debate in seven parts (in order):

Or go to Willy’s YouTube profile for all the video links.