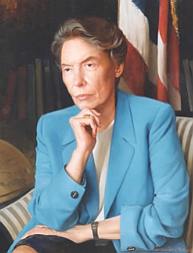 One of our most distinguished public servants died yesterday at the age of eighty.

Kirkpatrick’s death was announced Friday at the senior staff meeting of the U.S. mission to the United Nations, said spokesman Richard Grenell, who said that Ambassador John Bolton asked for a moment of silence. An announcement of her death also was posted on the Web site of the American Enterprise Institute, a conservative-oriented think tank here where she was a senior fellow.

The work she did will live after her, and it is impressive work indeed.

But even more impressive is how far she traveled in her walk across the political spectrum: from her days as a Marxist political science major at Columbia in the 1960’s to her speech at the 1984 Republican Convention:
– – – – – – – – – –

Thank you very much for that warm welcome.

Thank you for inviting me.

This is the first Republican Convention I have ever attended.

I want to begin tonight by quoting the speech of the president whom I very greatly admire, Harry Truman, who once said to the Congress:

“The United States has become great because we, as a people, have been able to work together for great objectives even while differing about details.”

“The elements of our strength are many. They include our democratic government, our economic system, our great natural resources. But, the basic source of our strength is spiritual. We believe in the dignity of man.”

That’s the way Democratic presidents and presidential candidates used to talk about America.

They were not afraid to be resolute nor ashamed to speak of America as a great nation. They didn’t doubt that we must be strong enough to protect ourselves and to help others.

They didn’t imagine that America should depend for its very survival on the promises of its adversaries.

They happily assumed the responsibilities of freedom.

I am not alone in noticing that the San Francisco Democrats took a very different approach.

A recent article in The New York Times noted that “the foreign policy line that emerged from the Democratic National Convention in San Francisco is a distinct shift from the policies of such [Democratic] presidents as Harry S Truman, John F. Kennedy and Lyndon B. Johnson.”

I shall speak tonight of foreign affairs even though the other party’s convention barely touched the subject.

When the San Francisco Democrats treat foreign affairs as an afterthought, as they did, they behaved less like a dove or a hawk than like an ostrich — convinced it would shut out the world by hiding its head in the sand.

Today, foreign policy is central to the security, to the freedom, to the prosperity, even to the survival of the United States.

And our strength, for which we make many sacrifices, is essential to the independence and freedom of our allies and our friends.

What would become of Europe if the United States withdrew?

What would become of Africa if Europe fell under Soviet domination?

What would become of Europe if the Middle East came under Soviet control?

What would become of Israel, if surrounded by Soviet client states?

What would become of Asia if the Philippines or Japan fell under Soviet domination?

What would become of Mexico if Central America became a Soviet satellite?

What then could the United States do?

The United States cannot remain an open, democratic society if we are left alone — a garrison state in a hostile world.

We need independent nations with whom to trade, to consult and cooperate.

We need friends and allies with whom to share the pleasures and the protection of our civilization.

We cannot, therefore, be indifferent to the subversion of others’ independence or to the development of new weapons by our adversaries or of new vulnerabilities by our friends.

The last Democratic administration did not seem to notice much, or care much or do much about these matters.

And at home and abroad, our country slid into real deep trouble.

North and South, East and West, our relations deteriorated.

The Carter administration’s motives were good, but their policies were inadequate, uninformed and mistaken.

They made things worse, not better.

Those who had least, suffered most.

The Carter administration’s unilateral “restraint” in developing and deploying weapon systems was accompanied by an unprecedented Soviet buildup, military and political.

The Soviets, working on the margins and through the loopholes of SALT I, developed missiles of stunning speed and accuracy and targeted the cities of our friends in Europe.

They produced weapons capable of wiping out our land-based missiles.

And then, feeling strong, the Soviet leaders moved with boldness and skill to exploit their new advantages.

Facilities were completed in Cuba during those years that permit Soviet nuclear submarines to roam our coasts, that permit planes to fly reconnaissance missions over the eastern United States, and that permit Soviet electronic surveillance to monitor our telephone calls and our telegrams.

Those were the years the Ayatollah Khomeini came to power in Iran, while in Nicaragua and Sandanista developed a one-party dictatorship based on the Cuban model.

Soviet block forces and advisers sought to guarantee what they called the “irreversibility” of their newfound influence and to stimulate insurgencies in a dozen other places.

During this period, the Soviet Union invaded Afghanistan, murdered its president and began a ghastly war against the Afghan people.

The American people were shocked by these events.

We were greatly surprised to learn of our diminished economic and military strength.

We were demoralized by the treatment of our hostages in Iran.

As a result, we lost confidence in ourselves and in our government.

Jimmy Carter looked for an explanation for all these problems and thought he found it in the American people.

But the people knew better.

It wasn’t malaise we suffered from; it was Jimmy Carter — and Walter Mondale.

And so, in 1980, the American people elected a very different president.

The election of Ronald Reagan marked an end to the dismal period of retreat and decline.

His inauguration, blessed by the simultaneous release of our hostages, signaled an end to the most humiliating episode in our national history.

The inauguration of President Reagan signaled a reaffirmation of historic American ideals.

Ronald Reagan brought to the presidency confidence in the American experience.

Confidence in the legitimacy and success of American institutions.

Confidence in the decency of the American people.

And confidence in the relevance of our experience to the rest of the world.

That confidence has proved contagious.

Our nation’s subsequent recovery in domestic and foreign affairs, the restoration of military and economic strength has silenced the talk of inevitable American decline and reminded the world of the advantages of freedom.

President Reagan faced a stunning challenge and he met it.

In the 3 1/2 years since his inauguration, the United States has grown stronger, safer, more confident, and we are at peace.

The Reagan administration has restored the American economy.

It is restoring our military strength.

It has liberated the people of Grenada from terror and tyranny.

With NATO, it has installed missiles to defend the cities of Europe.

The Reagan administration has prevented the expulsion of Israel from the United Nations.

It has developed flexible new forms of international cooperation with which to deal with new threats to world order.

The Reagan administration has helped to sustain democracy and encourage its development elsewhere.

And at each step of the way, the same people who were responsible for America’s decline have insisted that the president’s policies would fail.

They said we could never deploy missiles to protect Europe’s cities.

They said it would never be possible to hold an election in El Salvador because the people were too frightened and the country too disorganized.

But the people of El Salvador proved them wrong, and today President Napoleon Duarte has impressed the democratic world with his skillful, principled leadership.

They said we could not use America’s strength to help others — Sudan, Chad, Central America, the Gulf states, the Caribbean nations — without being drawn into war.

But we have helped others resist Soviet, Libyan, Cuban subversion, and we are at peace.

They said that saving Grenada from terror and totalitarianism was the wrong thing to do — they didn’t blame Cuba or the communists for threatening American students and murdering Grenadians — they blamed the United States instead.

But then, somehow, they always blame America first.

When our Marines, sent to Lebanon on a multinational peacekeeping mission with the consent of the United States Congress, were murdered in their sleep, the “blame America first crowd” didn’t blame the terrorists who murdered the Marines, they blamed the United States.

When the Soviet Union walked out of arms control negotiations, and refused even to discuss the issues, the San Francisco Democrats didn’t blame Soviet intransigence. They blamed the United States.

When Marxist dictators shoot their way to power in Central America, the San Francisco Democrats don’t blame the guerrillas and their Soviet allies, they blame United States policies of 100 years ago.

They know that Ronald Reagan and the United States didn’t cause Marxist dictatorship in Nicaragua, or the repression in Poland, or the brutal new offensives in Afghanistan, or the destruction of the Korean airliner, or the new attacks on religious and ethnic groups in the Soviet Union, or the jamming of western broadcasts, or the denial of Jewish emigration, or the brutal imprisonment of Anatoly Shcharansky and Ida Nudel, or the obscene treatment of Andrei Sakharov and Yelena Bonner, or the re-Stalinization of the Soviet Union.

The American people know that it’s dangerous to blame ourselves for terrible problems that we did not cause.

They understand just as the distinguished French writer, Jean Francois Revel, understands the dangers of endless self- criticism and self-denigration.

He wrote: “Clearly, a civilization that feels guilty for everything it is and does will lack the energy and conviction to defend itself.”

With the election of Ronald Reagan, the American people declared to the world that we have the necessary energy and conviction to defend ourselves, and that we have as well a deep commitment to peace.

And now, the American people, proud of our country, proud of our freedom, proud of ourselves, will reject the San Francisco Democrats and send Ronald Reagan back to the White House.

Thank you very much.

Notice a number of important things about her speech:

That’s because foreign policy is for thinkers, not for referees who want everything to be fair. And for this reason, Ms. Kirkpatrick joined the Republican Party. When she served in the UN – the first woman to do so – there was no one her equal until John Bolton came along.

After serving her time there, she said:

As I watched the behavior of the nations of the U.N. (including our own), I found no reasonable ground to expect any one of those governments to transcend permanently their own national interests for those of another country.”

“I conclude that it is a fundamental mistake to think that salvation, justice, or virtue come through merely human institutions.”

“Democracy not only requires equality but also an unshakable conviction in the value of each person, who is then equal. Cross cultural experience teaches us not simply that people have different beliefs, but that people seek meaning and understand themselves in some sense as members of a cosmos ruled by God.”