An argument has been raging in the comments to my post from last night about British and American roles in World War II.

David S. took the lead, with Cato seconding him. According to David S.,

…the fact is, in the strictest sense, it wasn’t our war. We could have, in reality, just let Europe and the UK fall to the dogs. We almost did, in fact, until Pearl Harbor. And if we had handled Pearl Harbor like we’ve handled 9/11 (that is, poorly), engagement would not have been inevitable.

Of course Britain took a hit from the war. It took a huge hit, a massive hit, far greater than the US — who actually benefited in the end in every possible sense. But that only makes sense, since they were the country being attacked, not us. Terrible comparison ahead: It would be like saying that Kuwait did more for the Gulf War than the US, because they took a greater hit economically and militarily. Of course they did; they were our ally, and we helped them out. What do you expect?

Now, I’m a well-known Anglophile, so anything I say is suspect. But I am an American, and I agree with David S. It wasn’t our war, at least not until December 1941 when Hitler declared war on the United States. 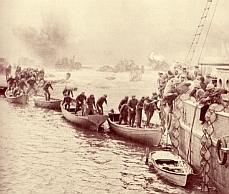 But this argument avoids the main point of my post: in an important sense, it wasn’t really Britain’s war, either. Especially after Dunkirk, when Britain lay exposed and vulnerable, it was not in the British national interest to continue the conflict. Only the Royal Air Force and the English Channel stood between Britain and the full might of the Wehrmacht.

All the back-and-forth about whether the Dominion troops or the British troops won the major battles — or whether the bleedin’ Poms were a treacherous bunch of no-goods — avoids the question of why the British, the Dominions, and all their colonial subjects were in the war in the first place.
– – – – – – – – – –
The British national interest did not require it. Treaty obligations with Poland didn’t have to be honored in 1939 any more than the pact with the Czechs had been observed in 1938. Some rationale could have been cooked up by the cynical wallahs in Whitehall that would have justified selling out the Poles, the French, and anyone else. The Frogs got themselves into this mess; let them get themselves out.

It was well known that Hitler respected the British, and had no desire to go to war with them. Despite the fact that the Anglo-Saxons had allowed the race to become tainted with the base blood of the Celts, Hitler still considered the British to be honorary Germans, worthy of taking their place alongside the Herrenvolk.

After Dunkirk, and after the Battle of Britain, the Germans still hoped for a negotiated deal with the British, one that would leave the Empire and the Royal Navy intact, as long as the Nazis were allowed a free hand on the Continent and in the East.

So why didn’t the British take the deal? It was a pretty good one, and the cynical calculations of statecraft should have compelled them to grab it.

But they didn’t. Opinion among the British wasn’t unanimous, and there were strong factions that pushed for reaching an accommodation with the Germans. Yet Churchill decided to continue the war, even without the help of the United States.

Long after the war, when the archives were opened and all the Cabinet minutes were revealed, it became clear that Churchill knew what the future of Britain was likely to be: bankruptcy, loss of the Empire, and reduced circumstances for the foreseeable future. He turned out to be right on all counts.

So why did they do it?

When you read about the private conversations that took place at the time — not the public pronouncements, and not the justifications cooked up after the fact — it’s clear that the senior statesman and decision-makers of Britain decided to continue the fight because it was the right thing to do. Not that it was in the interests of Britain, not because it would serve them well electorally or that they or their friends would make a profit out of it, but simply because it was the right thing to do. Any other course was unthinkable.

And that’s why the British deserve to be cut some slack, no matter how many times the treacherous bastards sold someone down the river or failed to keep a promise. They could have ducked the war with the Nazis, but they didn’t.

The United States behaved the same way before we entered the war. Roosevelt helped the British out behind the scenes, bucking a strong segment of public opinion (not to mention the Congress), not because it was in America’s interest, but because it seemed like the right thing to do. The commercial advantages of the deal with Britain don’t explain everything that Roosevelt did.

When a nation enters a war for reasons other than its national interest, the results can be catastrophic. It’s still arguable that the United States should have avoided fighting in either of the World Wars. And it’s also arguable that Britain would have been well-advised to cut a deal with Hitler.

Was it really a good idea for the leaders of Britain to do as they did? In another two or three centuries, historians may be able to give a cold-eyed answer to the question.

But it will probably be written in Arabic or Chinese.