My father worked for Signals Intelligence as a cryptographer during World War Two and the Cold War. He always took his security clearance seriously: he never discussed the content of his work at home. Neither his wife nor his children knew what he did for a living until after he retired and the NSA gave him a cryptography award. Finally, I knew what my dad did for a living!

But, whatever it was, we all knew it was serious Cold War stuff, because he had Army signals manuals and a Russian-English dictionary in the house. No need to ask why that would be…

Strangely enough, he also had a Swedish-English dictionary. During an email exchange with Kepiblanc, our Danish reader and translator, I mentioned this fact to him. Since I was aware of the attitude the Danes have towards Sweden, I knew it wouldn’t offend him if I implied that Swedish neutrality during the Cold War had not been considered entirely trustworthy by NATO.

And, indeed, he wasn’t offended. In fact, he had a little story to tell. 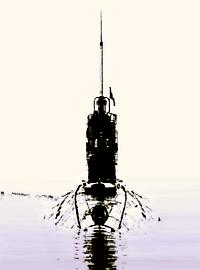 Just a couple of weeks ago was the 25th anniversary of the “Whiskey on the Rocks” affair, in which a Soviet submarine ran aground on a Swedish island. The sub was the U-137, a W-class vessel — known in military parlance as “Whiskey” class; hence the sardonic name for the whole lurid episode.

Kepiblanc told me a version of the incident that I had never heard before, one which he said is an open secret within certain circles in Denmark.

It seems that during the Cold War there was a tacit agreement between the Swedes and the Soviets. The Soviets would be allowed to practice submarine maneuvers among the Swedish islands, where sonar is severely impaired, and in return the Swedes would pretend not to know they were there.

Occasionally the Swedes would be allowed to “discover” a Soviet sub to prove that their coastal defenses were always on the alert. Just so long as they never dropped depth charges anywhere near where the submarines really were…

I asked Kepiblanc to provide Gates of Vienna with more information, and he generously sent us the following article.

Will Sweden survive the next six years as a civilized nation? 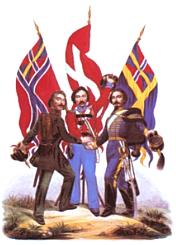 If so, it will mark 200 years of peace. In 1801 Sweden betrayed its allies in the “Union of Armed Neutrality” — encompassing Russia, Sweden and Denmark/Norway — with a disastrous outcome for Denmark. Now standing alone against an overwhelming naval force led by Sir Hyde Parker and Lord Horatio Nelson, the Danish Navy fought it out at “The Battle of Copenhagen”, lost 6,000 men, and in 1814 had to hand over Norway to Sweden.

But what if the answer to the question is “No”? If Swedish “neutrality” managed to keep Sweden a nation at peace for almost 200 years, why not any longer?

Well, maybe due to that very same policy — or should I say “mentality”? Could it be that many generations of Swedes living in peace can deprive an entire nation of the ability to see the signs of clear and present danger?

Now, seeing Sweden poised to surrender itself to Islam and its aspirations of a world-encompassing Caliphate, I’m tempted to answer that question affirmatively. But wait… I know the Swedes quite well and I can’t — even in my worst nightmares — imagine that the average Calle Svensson would disgrace himself by tumbling around in long shirts, kissing the dirt five times a day, nor would give up his renat and his kräftkalas (Google is your friend) and encapsulate his beautiful wife and daughters in black tents. Then how to explain the current miserable state of affairs? Is it thinkable that Calle is a victim of deception?

If so, it wouldn’t be the first time.

Exactly 25 years ago — on the morning of October 27th, 1981 — the world woke up to stunning photos on all the front pages: a Soviet submarine rammed into a rock in the Swedish Skärgård archipelago, its bow high on dry land. The affair made headlines for a few weeks and eventually calmed down to an “unlucky incident” involving a drunk driver of the U-137 sub, incorrect naval maps, and bad weather (!). the Soviet Navy hauled the sub off the rock and nobody was harmed. Apart from the reputation of the navies involved, that is.

But questions remained: Was it a coincidence that the affair took place right in the inlet of a major Swedish naval base (Karlskrona)? Was it a stray submarine way off its course? Was the Swedish anti-submarine defense incompetent? 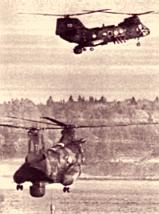 Many theories were aired, but no single one was confirmed. Nevertheless, during the following years countless “episodes” took place. Almost weekly a new Soviet submarine in Swedish waters was suspected, indicated by sonar and visual — but unreliable — reports. And the Swedish Navy made a spectacular performance on TV with detonating depth-charges, helicopters and whatnot. Somehow all those Soviet submarines seemed to evade real detection and never left a trail. Strange, to say the least…

One theory involved the US Secretary of Defense, Mr. Casper Weinberger, who admitted that US subs occasionally entered Swedish waters, but in full understanding with the Swedes, in order to test its coastal defense against the Soviets. That way the Swedish right-wing electorate was pacified. Another theory held that the whole rigmarole was nothing but a hoax by the Swedish Navy in order to raise funding. This would satisfy the left-wing electorate. A third that all those subs were in fact seals or minks with a submarine-like acoustic signature (!).

But the truth? Well, here 25 years, later let’s take a sober look. Some may call it yet another conspiracy theory — and they’re welcome to do so. But please don your fatigues and sea-boots, pull out your Manual on Submarine Warfare and consider this:

Let us assume there really were Soviet submarines in Swedish waters but no one was “caught”. Who would benefit? The logical answer is: everyone!

The Soviets had a major, tactical concern: The US Navy and the Royal Navy could easily hide their subs in the Swedish Skärgård — one vast, rocky maze of small islands. Anti-submarine measures are next to useless: active sonar in such waters is utterly futile, what with echoes bouncing all over. Passive sonar is an option, but signatures are badly distorted. From there, they could launch short- and medium- range cruise missiles at all the major Soviet installations in the Baltics. Accordingly, an effective and alert Swedish Navy would be very welcome.

The Swedes — especially the military and defense industry — would benefit in terms of merchandise and money. At the same time the Swedish government could assure NATO of its firm stance on neutrality: “Look, we’re alert and actually delivering live munitions!” — And the Swedish government and its MSM could give the electorate — left and right — the illusion of taking neutrality seriously.

NATO then? — Well, at that time it had no longer any need of delivering short-range missiles, and probably never had the idea of using these waters anyway. The Danish Navy with its ships, submarines, mining capacity and sea-fortresses were — in Josef Stalin’s words — “A stopcock in the Baltic Sea” and capable enough to contain the Soviet Baltic Fleet in its home waters, away from the high seas. So NATO could just spare itself the effort, money and concern. Let ‘em play…

A win-win-win situation if there ever was one.

Of course the main culprit of all this was: How to avoid casualties — it wouldn’t improve the relative quiet state of affairs if someone actually got hurt, would it? The obvious solution: Let’s arrange everything in a friendly and understanding way, shall we? The Swedes: “If the Soviets want to improve our Navy — well, they’re welcome.” The Soviets: “We don’t want surfaced subs or casualties, so please drop your depth-charges elsewhere. We’ll tell you where, OK?”

And Calle Svensson ? At that time he swallowed the story hook, line, and sinker. Does he still?

Here are some resources on the topic that Kepiblanc included with his article:

by Ola Tunander (pdf document). Claims all the “intrusions” were manipulations or inventions by the USA and the UK.

“Whiskey on the Rocks”. A detailed and entertaining account of the incident, with a lot of photos.

“Submarine Incursions in Swedish Waters, 1980-1992: Comment on the Research Controversy” by Ola Tunander (pdf format). A brief account that once again emphasizes the likely presence of NATO vessels.

“25-year anniversary of Soviet U-137 submarine crisis”, by Lennart Simonsson, Oct 27, 2006. A retrospective overview of the incident in Monsters and Critics.