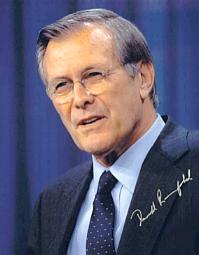 In From the Cold has the best assessment of the leave-taking of Donald Rumsfeld from the Department of Defense: President Bush and his advisers threw Rummy under the bus.

A succinct explanation for a dishonorable act. And the most dishonorable aspect is its timing. Want to shift the blame for the mistakes, mis-steps, and blunders for the second term of this administration? Why, then, choose the third most reviled member of the group. The easiest target, the scapegoated focus of pacifist hate: Donald Rumsfeld.

Perhaps it was past time for Mr. Rumsfeld to take his leave. Certainly the turncoat, disloyal General staff were loud in their disapproval. No mention of their own mistakes, of course, or how angry they were that Rumsfeld had to rebuild from the mess Clinton left in his anti-military wake. Where were they when Clinton was derelict? Where were the talking military heads then? Hunkered down and waiting for safer times, that’s where.

If the Secretary of Defense needed to leave, it should never have happened the day after an election in which the Republicans were defeated. How lick-spittle can you get, Mr. Bush? If you ever had a sense of timing – and some have complained of this deficit – it surely wasn’t on display in this jettisoning of one of your most loyal players. Would you mind describing again to us your valuation of loyalty, sir?

Despite yesterday’s Democratic victory, and demands for a “new course” in Iraq, I am disappointed by today’s announcement, or perhaps more correctly, the timing of the move. Don Rumsfeld has been a loyal administration soldier for almost six years, trying to manage both the War on Terror and the transformation of the U.S. military, Herculean tasks that would be difficult under any circumstances. Attempting to do them simultaneously is unprecedented in our military history.

And I cannot over-emphasize the difficulty of those tasks. Clearly, there are problems in Iraq, and those difficulties ultimately led to Mr. Rumsfeld’s departure. But there have also been successes in the War on Terror, namely the liberation of more than 50 million people in Iraq and Afghanistan, and untold victories that we may never know of. Such victories are accomplished by a special forces team that takes out a high-value target in the back alleys of Baghdad, or an NSA analyst who identifies—and prevents—a money transfer to an Al Qaida cell preparing an attack in the Middle East, or here in our homeland. Prevailing in these small and seemingly unrelated events is how the War on Terror will eventually be won, and Mr. Rumsfeld deserves some of the credit for those successes.

Mr. Rumsfeld deserves some of the credit for those successes. Marshaling our forces to fight this war was an exceptionally difficult job, and Rumsfeld should be commended for re-orienting our military to fight a long war against Islamofacism.

…Defense Secretaries fight wars with military forces that are largely shaped, trained and equipped by the predecessors. Today, we have an Army with only 37 active duty combat brigades, a result of cutbacks endorsed by Bill Cohen, William Perry, Les Aspin and even Dick Cheney. Ditto for the military brass that warned we would need 350,000 troops to secure Iraq. They offered those warnings with the full knowledge that troop cuts they had previously supported—or failed to prevent—would make such force levels an impossibility. Yet, critics who assailed Rumsfeld for “insufficient” force levels in Iraq conveniently ignore the fact that our current combat structure was heavily influenced by decisions made a decade ago—or longer.

– – – – – – – – – –
Secretary of Defense Rumsfeld will not get the assessment he deserves until all the players currently on the field are long gone. And it may prove to be one of the larger, and more dishonorable blunders in a period full of them. I sadly concur with Spook 86:

As for the timing of today’s announcement, it smacks of a White House in full panic mode, anxious to court favor with the new Democratic majority. It’s a fool’s errand, as Mr. Bush and his advisors will soon discover. Throwing Rumsfeld under the bus won’t produce a sudden “new course in Iraq” (unless, of course, you’re talking about a cut-and-run strategy).

So that’s what we will prepare for, folks: once more the Dems, the dishonorable, will cut and run. They will leave other people to die because of their own lack of courage and foresight. It’s what they know how to do. After all, what is worth dying for? What is worth risking our creature comforts for? Not much, if you take them at their word.

I wonder what the Vietnamese boat people who made it to this country are thinking tonight? I wonder if they feel a special anguish for the coming fate of the Iraqis once Nancy Pelosi is in charge and President Bush is letting her take the lead in the headlong rush out of the Vietnam-Iraq (same thing) quagmire created by the elite MSM and the hatred of the left for anything valiant.

Now prepare yourselves for the coming impeachment proceedings and the coronation of President Pelosi.

Our only hope is that Hillary, with all her connections and cunning will never, ever let this come to pass. Read her lips: “over my dead body.” And may the better woman prevail.

If you want your intuitions about what is to come to be validated, click the link and scroll down for Spook’s assessment of Mr. Gates, the replacement for Secretary Rumsfeld. The perfect, colorless and transparently invisible replacement. Because at this point, what does it matter? All the administration wants is a cipher, someone who can kowtow to the Democrats. Well, they hunted high and low, and sure enough, they found one.

For an excellent assessment of the campaign and election, read Spook’s previous post, “Lessons Learned.” Reviewing the issues as though they were part of a military after-action report on what went wrong, Spook leads us through each point in the mess that ended on Election Night, 2008.

And he leaves us with Churchill’s admonition: In Victory, Be magnanimous, in Defeat, Defiant!

So…in keeping with Prime Minister Churchill’s advice, I say, “up your nose with a rubber hose, Pelosi. May you have every bit of the success you deserve.”

23 thoughts on “"Throwing Rumsfeld Under the Bus"”