The conventional wisdom on the Left lumps all conservatives together with the Christian Right, and disregards the many secular libertarians and conservative atheists like Bill Quick. Never mind anyone who doesn’t fit the mold — we know they’re all Christer wackos, waiting for the Rapture while their ZioNazi puppeteers in Tel Aviv pull the strings. 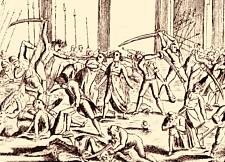 And so there is an equivalence between the Islamic radicals and Christian conservatives. The Islamists have the Koran; the Christians have the Bible. The Muslims long for the Caliphate; conservatives are looking forward to an American-ruled Christian imperium.

The Shiites wait for the Twelfth Imam to return from the bottom of a well; the evangelicals look for Christ to return to Earth on a cloud. Same thing.

The shahids blow up women and children on buses; the disciples of Christ shoot abortion doctors. Same thing.

Each group has its martyrs. Both groups demean and oppress women. Both groups fervently espouse life-destroying doctrines without regard for others.

Liberals are above religion. They have outgrown the opiate of the people.

But the “Psychological Left”, as Gagdad Bob calls it, does not have the capacity for self-reflection. Its beliefs are based on feelings, on emotions. Dialogue within the fold is rare. Dialogue between the fold and the outside world is non-existent.

The Left is currently in a tacit alliance with radical Islam, which is not surprising, considering the resemblance between leftist thought and the dogma of religion. A few characteristics to compare:

Christians have God and Jesus, Muslims have Allah and Mohammed, and Leftists have… well, nothing, really, except the nebulous feeling that they’re right and we’re wrong. If there were a Hell, you and I would be sure to burn in it for all our sins against Socialist Truth.

But that’s the big difference between the Left and Islam. A shahid is willing, even eager, to die for Allah. But a lefty, having neither deity nor afterlife to look forward to, is unwilling to die for anything. Heck, he’s not even willing to face major discomfort. He’s willing to pitch a traffic cone through the plate glass at Starbucks occasionally, and maybe pose for a mug shot from time to time. But threaten to take away his latte or his yoga classes, and he’ll fall right into line.

So… when the unnatural alliance between the Dingbat Left and the Great Jihad finally unravels, who do you think will be holding the trump card?

38 thoughts on “The True Believers”