Update: I recognized when I put up this post that it would be controversial, to say the least. In response to various commenters, in order to explain my attitude towards the issue more fully, I said this:

I agree; this is a wild theory. That’s why I put it here along with a whole shaker full of salt.

But Carl (who is not a nut-case at all) raises a contradiction that cannot be resolved without an explanation that goes beyond the official one: If Rabin was shot in the back, then how to account for the clearly-sourced references to his being shot in the chest?

Maybe the doctors involved misspoke themselves or made some kind of mistake. Maybe there is some other kind of reasonable explanation.

But some kind of explanation definitely needs to be found. 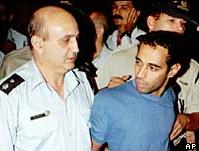 On November 4, 1995 (eleven years ago today if you’re reading this in Israel), Israeli Prime Minister Yitzhak Rabin was assassinated. A young man named Yigal Amir was convicted of the crime and sentenced to life in prison plus eight years.

Mr. Amir has been characterized as a right-wing extremist who was unhappy with Mr. Rabin’s part in the Oslo accords and his dealings with the PLO. According to the prevalent theory, the conspiracy to kill the Prime Minister — of which Amir was simply the triggerman — wanted to put a stop to the Oslo process.

In the years since the assassination, various conspiracy theories have swirled around the incident, claiming that Amir was not in fact the assassin, and positing various alternative scenarios involving nefarious government functionaries, and probably the Illuminati, for all I know.

But Carl in Jerusalem has recently outlined a coherent theory of what might have happened, a version that explains all the anomalous facts. I had hesitated to post about it, since he was relying on a single source, his friend “Dr. Josh”.

Here’s what Carl has to say:

Notice in the video that Rabin is shot in the back. Now (with apologies to those without sufficient Hebrew to understand this), watch an interview with Dr. Barabash, who was then the director of Ichilov Hospital (I believe that today he’s the managing director of the Ministry of Health) — where Rabin finally arrived 22 minutes after he was shot at a place that is 90 seconds (tops) from the hospital by car. Note that Dr. Barabash says specifically that Rabin was shot in the chest.

Now, last but not least, we have Dr. Ephraim Sneh, the current Deputy Defense Minister and then the Minister of Health, being interviewed as he leaves the hospital on the night of the assassination. Note that he too says that Rabin was shot in the chest.

But you will all recall that two screens ago you saw Amir shoot Rabin in the back! And that, my friends, is one reason why none of this makes any sense. Now, go back and read my friend Dr. Josh’s explanation, the historical context for what happened, and the fact that the government will not even let Amir see Rabin’s x-rays (and believe me — the suppression of evidence during the ‘trial’ was much worse).

This is an outline of the most plausible (and least outlandish) theory of what really happened.

The idea was that Mr. Rabin would miraculously escape assassination, public opinion would rally to him in sympathy, and the elections would go well for him and his party, and for the “peace process”.

What the conspirators were unaware of is that blanks fired at close range can seriously harm a person, especially if he has a history of medical trouble. The firing of the blanks induced a coronary (or something similar) in Mr. Rabin, and when his aides got him into the car, he was dead or dying. Realizing that they were in deep trouble, they took a detour on the way to the hospital, arranged to have Mr. Rabin shot, to make the assassination narrative credible, and later conspired to destroy or hide evidence that would expose their botched plan.

But they made the mistake of shooting him in the back, and that unhinged their whole scheme.

This is a pretty wild conspiracy theory, and readers are welcome to take with as many grains of salt as necessary. Maybe a whole shaker.

But make sure you go over to Israel Matzav and read the whole thing. Follow the links, and watch the videos. Find someone who understands Hebrew to help you, if you can.

Carl, being an Orthodox Jew and a conservative Israeli, has a vested interest in seeing Yigal Amir exonerated. But his account conforms to Occam’s Razor: it does not multiply entities needlessly.

20 thoughts on “Who Shot Yitzhak Rabin?”