Last night, November 9th, was the sixty-eighth anniversary of Kristallnacht. The Jewish community of Copenhagen held a torchlight ceremony in front of the old synagogue in remembrance of that terrible night.

Steen of the Danish blog Snaphanen sent me a tip about the event, adding this:

I’m not Jewish, but I’ve always sided up with the Danish Jews, especially now I see how “the new Danes” treat them.

He took some photos and videos (see the videos here and here), but his post is entirely in Danish (scroll down for the Kristallnacht part).

The videos are in Danish, too, but one of them shows a woman singing a moving and melancholy song, one that communicates quite effectively outside the medium of language.

Danish-speakers are welcome in the comments to weigh in and gloss anything of interest.

Kristallnacht (really two nights) was the culmination of a series of official German actions directed against the Jews, including a succession of laws that progressively deprived Jews of their civil rights and their property. Here’s an account of the events from the Jewish Virtual Library:
– – – – – – – – – –

In the first half of 1938, numerous laws were passed restricting Jewish economic activity and occupational opportunities. In July, 1938, a law was passed (effective January 1, 1939) requiring all Jews to carry identification cards. On October 28, 17,000 Jews of Polish citizenship, many of whom had been living in Germany for decades, were arrested and relocated across the Polish border. The Polish government refused to admit them so they were interned in “relocation camps” on the Polish frontier.

Among the deportees was Zindel Grynszpan, who had been born in western Poland and had moved to Hanover, where he established a small store, in 1911. On the night of October 27, Zindel Grynszpan and his family were forced out of their home by German police. His store and the family’s possessions were confiscated and they were forced to move over the Polish border.

Zindel Grynszpan’s seventeen-year-old son, Herschel, was living with an uncle in Paris. When he received news of his family’s expulsion, he went to the German embassy in Paris on November 7, intending to assassinate the German Ambassador to France. Upon discovering that the Ambassador was not in the embassy, he settled for a lesser official, Third Secretary Ernst vom Rath. Rath, was critically wounded and died two days later, on November 9.

The assassination provided Joseph Goebbels, Hitler’s Chief of Propaganda, with the excuse he needed to launch a pogrom against German Jews. Grynszpan’s attack was interpreted by Goebbels as a conspiratorial attack by “International Jewry” against the Reich and, symbolically, against the Fuehrer himself. This pogrom has come to be called Kristallnacht, “the Night of Broken Glass.” 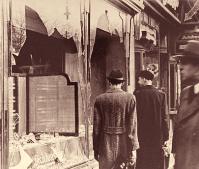 On the nights of November 9 and 10, rampaging mobs throughout Germany and the newly acquired territories of Austria and Sudetenland freely attacked Jews in the street, in their homes and at their places of work and worship. At least 96 Jews were killed and hundreds more injured, more than 1,000 synagogues were burned (and possibly as many as 2,000), almost 7,500 Jewish businesses were destroyed, cemeteries and schools were vandalized, and 30,000 Jews were arrested and sent to concentration camps [added by Mitchell Bard from his book The Complete Idiot’s Guide to World War II. NY: MacMillan, 1998, pp. 59-60].

The official German position on these events, which were clearly orchestrated by Goebbels, was that they were spontaneous outbursts. The Fuehrer, Goebbels reported to Party officials in Munich, “has decided that such demonstrations are not to be prepared or organized by the party, but so far as they originate spontaneously, they are not to be discouraged either.” (Conot, Robert E. Justice At Nuremberg. NY: Harper & Row, 1983:165)

Many historians view November 9th, 1938, as the beginning of the Holocaust. The Nazis used the events of that night as an excuse to pass even more draconian anti-Jewish laws, blaming the Jews themselves for the pogrom directed against them. Any insurance claims owed to Jewish businesses or individuals by German firms were diverted to the German government, with the aim of “removing the Jews from the economy of the Reich.” All the bureaucratic machinery had now been put in place, ready for the Final Solution to begin.