It’s the Marine Corps birthday, everyone. Time to celebrate a Marine, cheer up, and move on.

This Sunday, the 45th annual Marine Corps worship service will be at the National Presbyterian Church, 4101 Nebraska Avenue, NW.

And just to let you know it’s an official event, here are some “suggestions” from the Commandant on what to wear —

Uniform for active duty Marines is Dress Blue “B” with ribbons and no badges. Other services should wear their equivalent uniform; civilian dress is business suit.

Semper Fi, you guys…especially Chester, who posted the following description, by an anonymous Canadian: 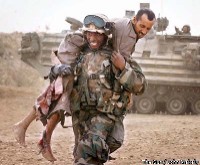 “Marines are about the most peculiar breed of human beings I have ever witnessed. They treat their service as if it were some kind of cult, plastering their emblem on almost everything they own, making themselves up to look like insane fanatics with haircuts to ungentlemanly lengths, worshipping their Commandant almost as if he were a god, and making weird animal noises like a band of savages. They’ll fight like rabid dogs at the drop of a hat just for the sake of a little action, and are the cockiest sons of bitches I have ever known. Most have the foulest mouths and drink well beyond man’s normal limits, but their high spirits and sense of brotherhood set them apart and, generally speaking, the United States Marines I’ve come in contact with are the most professional soldiers and the finest men I have ever had the pleasure to meet.”

That’s quite an accurate summary, though it fails to catch the esprit de corps of those guys. “Sense of brotherhood” merely scratches the surface.

I don’t know what it’s like now, but way back when I was a Marine Corps wife, someone who was on active duty with the 82nd Airborne came to visit us on base. He was amazed that women walked freely about without fear of being attacked. He assured us that was not the case on the Army base where he served. Until he said that, it had never occurred to me exactly how secure a Marine Corps base really was.

I loved the Marine Corps. Still do. There is some similarity between being a Catholic and being a Marine. No matter how long ago those events were, no matter what may have happened in the intervening years, on November 10th, you remember. For a brief day, you still belong. Kind of like showing up for Midnight Mass…and remembering the magic of the bells.

So Happy 231st, jarheads! Long may you reign.

13 thoughts on “November 10th? You Know What That Means!”