Khalid Adem was convicted today and sentenced to ten years in prison for performing a female genital mutilation on his little girl. 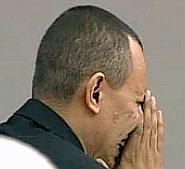 A verdict was reached Wednesday afternoon in the case of a Gwinnett County man accused of mutilating his daughter.

After less than three hours of deliberations, a jury made up of seven women and five men decided that Khalid Adem is guilty on charges of cruelty to a child and aggravated battery.

Now that the trial is over, I can say that both Dymphna and I think this guy was railroaded. The most likely scenario is that he knew about the “circumcision”, and may even have suggested it, but did not perform it. Men in Ethiopia never perform this operation; it is always done by the women. This is a travesty.

See Dymphna’s earlier posts for more on this sad affair.

Update: Fausta has reminded me that Mr. Adem was not convicted under the female genital mutilation law, which was passed after his crime was committted, but under a previously existing child battery law.

Dymphna, of course already knew this — I should have run it by her first!

21 thoughts on “Khalid Adem Has Been Convicted”