The Human Rights Watch has issued a report on the recent trial of Josef Stalin Saddam Hussein.

Predictably, HRW is distressed at the unfair trial of the monster. Let me state my concerns at the get-go: the biggest mistake in this trial was its very existence. Hussein should have been summarily executed right in the hidey-hole where he was discovered.

And just to make sure it was “fair,” an Iraqi volunteer should have had the honor. A call for one would’ve produced thousands, if not millions of grieving citizens willing to pull the trigger, toss in the gas, and seal over the hole with rocks – whatever it took for a “fair” and just response to this monster’s crimes.

Putting him in a court docket wasn’t fair, it was a disgusting waste of lives, time, and money. Saddam Hussein had long since crossed the line where justice is called for in the decades prior to American boots landing in his bloodied and bowed country. He is evil on a world scale; much the same as his hero, Stalin – though he didn’t have the same amount of human resources to degrade. 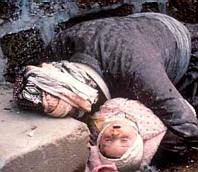 And Human Rights Watch’s fisking of the trial proceedings is not only unjust, it’s trivial. If there was to be a trial in the first place, a good prosecution would simply to have put up pictures, frame by frame, of all those he tortured, gassed, massacred, raped, etc. They could have shown the personal video tape collection Saddam himself kept of these killings so he could play them back for his own entertainment.

And while we’re on the subject of self-righteous watchdogs, where are the greenies? Why haven’t they come forth at this trial to complain about Saddam’s ruining of the wetlands in the north? It was a project he undertook to drive out the Kurds, but what about the senseless harm he brought to vast numbers of wildlife?

And where are the women’s groups? Why weren’t they at the trial to protest Saddam’s treatment of women, who could be – and were – grabbed off the streets for his evening’s entertainment?

Instead, the report complains about things like the frequent changes of judges (it never mentions the constant threats the judges were subjected to by Saddam’s cohorts), it complains about the demeanor of the judges toward the defendants. Here’s one exchange HRW shows as proof of poor judicial deportment:

On June 12, 2006, the judge entered into an exchange of insults with defendant Barzan al-Tikriti before ordering the latter’s removal from the chamber. Al-Tikriti had complained that witnesses for him were scared to come forward to testify:

Judge: Afraid of Whom? Ghosts?

Al-Tikriti: Afraid of the terrifying court.

Judge: Why do you always have to be the hero? Get him out of here.

The injustice! The unfairness! The disgrace!

The Human Rights Watch report on Saddam’s trial is a sick joke. It is simply one more proof that Western civilization is hell-bent on a suicide mission. These people are but one contingent of the Kamikaze Kids, carrying on in behalf of Saint Karl Marx.

I’m sure you could name a dozen other groups, all intelligent but woefully – and especially willfully – ignorant of the malignant evil of those they propose to protect. Such groups actually serve to increase the evil present on this planet, and they do so in the name of Justice.

I’m sure that lady has long since removed her blindfold by now. She is sitting in the gutter, sobbing into her handkerchief. Who needs a blindfold when groups such as these seek to poke your eyes out and make a mockery of your name?

The time cannot come too soon when we will be able to speak of this evil man in the past tense.