Some strange doings have emerged this week from Smithfield-Selma Senior High School in Smithfield, North Carolina. It seems that a Spanish teacher has exceeded the bounds of the course curriculum: 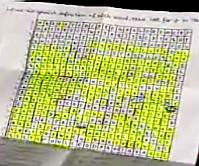 Khalid Chahhou, who was in his first year of teaching in Johnston County, gave students a worksheet in which they were to translate words and find them within a word-search puzzle.

Some students started uncovering strange words in the process.

“There were words like ‘kill,’ then I saw it said ‘destroy America,’” Eric Herrera said. 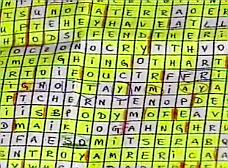 As they read on, students found the puzzle contained a paragraph that contained the following phrases:

These images of the hidden-word puzzle were all screen-capped from a WRAL (Raleigh) news video. I had to enlarge and enhance them somewhat to make the words legible. Strangely enough, “Palestine” seems to be misspelled.

Based on his name and the gist of the hidden words, it’s no surprise that Mr. Chahhou is Muslim. He has another job teaching Arabic at a school affiliated with the Islamic Association of Cary. Last February the Association denounced the Danish Mohammed cartoons — no surprise there, either.

His name is unusual, so it’s fairly easy to find other references to Mr. Chahhou on the web. Last August he participated in a Washington D.C. pro-Lebanon (read: pro-Hizbullah) rally along with Ramsey Clark. According to Canada’s National Post:

Speaking at a pro-Lebanon rally a stone’s throw from the White House Saturday, attended by thousands, Khalid Chahhou, from North Carolina, said Bush’s comments do not promote the U.S. government’s fight against terrorism.

The spelling of his last name, coupled with its pronunciation (“Shah-hoo”) indicates a Francophone transliteration, and hence a Moroccan or Algerian background. Sure enough, according to this CUNY doctoral program listing (in Spanish), he is from Morocco. At the time of the listing, he was at CUNY specializing in “Hispanic socio-linguistics”, and planned “to do his doctoral thesis on the linguistic attitudes of the residents of the Moroccan community in Andalusia, Spain.”

No word on how all that turned out. But somehow he developed a linguistic attitude of his own, and let it show in his little Hispanic socio-linguistic puzzle.

Khalid Chahhou has now been fired by the school district. Mr. Chahhou told WRAL that he never meant to upset anybody by what he did. But what did he think would happen? Did he expect that he would inspire his young charges with righteous zeal on behalf of the Palestinian cause? Or that no one would even notice?

How many more Khalid Chahhous are out there in the United States, teaching our children, loading baggage at the airport, or driving armored cars? It may be that Mr. Chahhou’s mental state is a little unstable, and he tipped his hand. But there must be thousands of others out there who are cool and cautious, who are never foolish enough to write out in plain English the words “DESTROY AMERICA”.

The high school turned the matter over to the Johnston County sheriff’s office, which looked at the case, and declined to file charges. That’s as it should be — it’s a free country, and Mr. Chahhou can say what he likes, though not necessarily within the school system.

But I hope the sheriff’s office wrote the case up carefully and thoroughly, and then passed it on up the chain to the FBI.