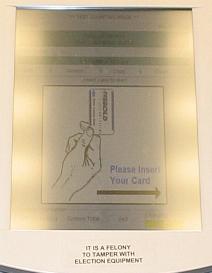 Do you all remember the aftermath of the 2000 election? Five years ago, after the Great Hanging Chad Crisis in Florida, Diebold and the magic of technology were going to save the American electoral system. Well, that was then, and this is now.

It seems there’s a bipartisan effort being mobilized to demonize the Diebold company and its electronic voting machines. The conspiracy-mongers are more numerous and more wild-eyed on the Democrat side, but both parties are definitely contributing to the mania.

My good friend Wally Ballou emailed me this morning:

Have you noticed that the left is busy preparing its excuse/legal strategy in case they don’t win big Tuesday? The new villain is the Diebold voting machine company, which is “known” to be dominated by “religious right-wing wackos”, and which already electronically stole the vote in Ohio and Florida in 2004.

Look for this news to bubble up on November 6, regardless of the outcome, but especially if they don’t take the House.

Try Googling “diebold” and see what comes up. Better yet, “diebold republican” or “diebold conspiracy”

HBO got their licks in with a breathless documentary called “Hacking Democracy”.

It’s all part of the movement to permanently subordinate election results to the review and decision of the courts. How’s that for democracy?

And it all started because of the dimples and hanging chads in 2000. Congress decided to federalize all electoral procedures and mandate electronic voting. Seemed like a good idea at the time (to them). Now all the dems who voted for it are calling it a plot (hey, just like the war).

Just to pick one example, you can visit Rolling Stone and read Robert F. Kennedy Jr.’s article, “Will The Next Election Be Hacked?”. Want to guess what his answer is? 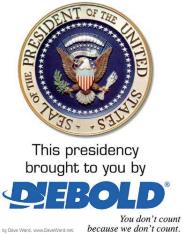 At the eye of the biggest conspiracy hurricane stands Diebold’s former chairman, Wally O’Dell. Back in 2003, at a fundraising dinner for President Bush, Mr. O’Dell — not realizing what forces he was unleashing in the nutroots — said that his highest priority was to deliver the state of Ohio to the Republicans.

And so the wacko Left is ready to contest any and every contest where their candidates lose, as long as a Diebold voting machine is involved.

But they aren’t the only ones ready to jump on Diebold. Here’s Mike Himowitz, writing in The Baltimore Sun about the upcoming election in Maryland:

Consider that at least 175,000 Maryland voters have asked for absentee ballots this year—an all-time high. In fact, their number represents about 10 percent of the votes cast in the 2002 gubernatorial election—certainly enough to turn even a relatively close contest into a cliffhanger.

There are a couple of reasons for the absentee boom. One is convenience. This is the first year voters can cast absentee ballots on demand, as opposed to certifying that they have a good reason, such as being incapacitated or out of town on Election Day.

But most of this year’s absentees were recruited by [Republican] Gov. Robert L. Ehrlich Jr., who decided he didn’t trust the Diebold electronic voting system he personally approved just a few years ago. Or maybe he doesn’t trust the State Board of Elections, a majority of whom he appointed.

Paranoid this may be, but it’s paranoia well taken.

The Diebold AccuVote TS system—the electronic terminals that you and I are spending $106 million to install in every nook and cranny of the state—is inherently flawed because the results can’t be verified. Like similar voting systems from other manufacturers, it’s a classic “black box” that counts votes using secret, proprietary software.

In case of a dispute (and this election is likely to produce a big one), there’s no way to verify the results.

There’s no way to verify the results.

There’s the rub. If you are on the losing end of an election, and your margin of loss was, say, 321 votes out of 500,000, what can you do? No real recount is possible — all the numbers can dumped off all the Diebold hard drives one more time, but that won’t change anything. There are no punch cards, no ballots, no nothing, not even any chads to hang — just some binary numbers on magnetic media. Nothing further can be determined.

So what do you do? Concede the election, shake your opponent’s hand, and retire to obscurity? Or do you pay a fat retainer to your favorite hotshot legal firm and start filing lawsuits in state and federal court?

That’s why I objected to electronic voting in the first place; it was easy to see that it would come to this. Any computer programmer can tell you how simple it is to game an automated system, and how hard the results are to detect. All it takes is enough administrative cover from above. Just suborn a couple of people in management, who in turn will suborn a couple of programmers to hack the system, and you’ve got it made.

Electronic voting effectively enables the automation of fraud. It’s cheaper, quicker, and easier than getting names off tombstones or busing winos around the city to vote in six different precincts each.

And electoral fraud has always been a bipartisan affair. In recent years the Democrats seem to have taken the lead in it, but that may be simply because they control most of the local government patronage in the big metropolitan areas, where government is the most corrupt and fraud is the easiest to engineer.

Is the fear of the Great Diebold Conspiracy at least partially projection, then? Are the Democrats afraid of losing their accustomed edge in the voter fraud contest?

In any case, this issue could kill the electoral process beyond the point of resuscitation. Once the “stolen election theme” has been pounded on sufficiently in the compliant organs of the MSM, once the “count every vote” mantra has been repeated often enough… With no possibility of a recount, public confidence in the electoral process will evaporate, and elections then become meaningless. The universal franchise will be replaced by the rule of the judiciary.

On that gloomy note, I will leave you with this final thought from Wally (Ballou, not O’Dell):

And look who last won an election in Venezuela…

I misquoted Wally Ballou (or miscopied his email, or something). I have corrected it. Thanks, Wally.

3 thoughts on “Blame it on Diebold”