Neo-Neocon informs us that Pakistan has finally begun to move against the harsh anti-female laws that have been in effect in for almost thirty years. The infamous legislation, known officially as Offence of Zina (Enforcement Of Hudood) Ordinance, 1979, provided sentences of death by stoning for married men or married women who were found guilty of adultery. The unmarried were merely flogged.

Here is the precise wording:

(3) Whoever is guilty of zina-bil-jabr liable to hadd shall subject to the provisions of this Ordinance,

(a) if he or she is a muhsan [married person], be stoned to death at a public place; or

(b) if he or she is not muhsan, be punished with whipping numbering one hundred stripes, at a public place, and with such other punishment, including the sentence of death, as the Court may deem fit having regard to the circumstances of the case.

Of course, there is much dispute on what constitutes “zina” – Islamic scholars disagree as to whether it is the term for adulterous sex, or can be applied to any consenting adults, not married, who engage in sexual congress. If you want to fall asleep trying to figure out the differences, try this site on stoning.

What is surprising is that this bill, reducing the sentences of those caught in flagrante delicto, got through the Pakistani legislature at all. The MMA, a loose coalition of the extremist Islamic groups, has been fighting a rearguard action for some time, dragging its feet as Musharraf tries to bring the country within shouting distance of the modern world.

Back in June, 2005, Gates of Vienna reported on the MMA, noting its logistical problems: 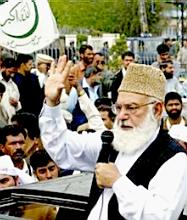 They [the MMA] have succeeded in defeating attempts to repeal the Islamic penal provisions that date from the 1980’s. Thus, a woman still needs four men to testify for her when she’s raped. They’ve also been successful in defeating Musharraf’s attempts to repeal blasphemy laws. But they failed to stop bus service into Kashmir and they are in crisis since the government has begun negotiating with Benazir Bhutto’s PPP. If Musharraf can bring off a successful negotiation, it will end his dependence on the MMA for parliamentary strength.

Back then, the MMA was up in arms over the idea of women jogging. There were huge demonstrations at the time. In fact, the notion of women being allowed to even move fast seemed more than the extremists could tolerate —
– – – – – – – – – –

…they didn’t want their “sisters and sisters-in-law” running around the country in their t-shirts and knickers. So when the women showed up [to run] in their traditional salwar kameez and wearing high heels, the MMA retreated to another tack: no running with men. When that didn’t work, they got down to it: no running at all for women, not even during the Haji rites.

This week, the night before this latest legislative furor, Musharraf marshaled his forces, and the new, less stringent laws (carrying fines and jail time but eliminating death and flogging) were passed by the National Assembly.

Of course, there was much wailing and gnashing of teeth in the outer darkness. Here’s the report from Dawn (sign in required) a Pakistani newspaper written for English readers:

The Muttahida Majlis-i-Amal (MMA) has said that it will shortly convene the party’s supreme council to discuss the situation arising out of the passage of the Protection of Women’s Rights bill.

“We have decided to consult our legal advisers and religious scholars to see whether or not the reservations expressed by the government-appointed panel of ulema have been addressed. We will then take a decision [on resigning from assemblies],” said Maulana Fazlur Rahman, leader of opposition and MMA secretary-general, while speaking at a press conference after the passage of the bill here on Wednesday.

In a recent meeting of its supreme council, the MMA had announced that it would quit the assemblies if the government passed the PWR bill without addressing its reservations.

Of course, now that the bill has passed, the MMA is saying Pakistan will become a “free sex zone.”

As if laws ever managed to curb the hardwiring in the human brain – and heart – which demands that we “be fruitful and multiply.” Our synapses do not listen to those who demand sanctioned liaisons; they never have and they never will. Anyone who thinks otherwise is living in a fool’s paradise. For untold millenia, men and women have paid the consequences of illicit love. Just google “Abelard and Heloise” to see.

Good on Musharraf — not only has he managed to survive physically, he is slowly moving his country in the right direction, using the wiles of any good politician:

Government spokesmen had earlier said the bill, taken up on Wednesday about two months after it was put on ice because of the controversy, would be passed by Friday. But the ruling coalition, led by the Pakistan Muslim League (PML), decided to finish the job in one day after President Pervez Musharraf apparently gave a pep talk to Prime Minister Shaukat Aziz and other party leaders at a dinner meeting on Tuesday night.

Let’s see what the MMA does next. Does anyone really think that they’ll resign en masse, huffily walking out of the National Assembly, never to darken its doors again?

If they are so foolish as to do so, as they march out, I hope they are chased by a battalion of women clad in their salwar kameezes and running in high heels, waving victory banners. And I hope someone has a camera.

The waves of Mukhtar Mai’s rebellion against a muderous, shame-based sytem continue to wash against and erode a cruel tradition. What she started cannot be stopped now. It can be delayed, but it cannot be brought to a halt.

Guess what? The MMA knows this. They are fighting a losing battle, but for all their talk of leaving the battlefield, that’s all it is: talk.

One thought on “A Little Breathing Room for Pakistani Women”