The Washington Times reports today that women in Europe who show up for job interviews decked out in Muslim head veils are being asked to remove them or leave.

Now how un-p.c. is that??? Do the French have some similarly slimy version of the ACLU to go to bat for this woman?

When Nora Labrak arrived at a private employment agency in the summer near the French city of Lyon, the first question she was posed was not about her resume.

“I was asked to remove my head scarf at the lobby,” Miss Labrak recalled in a telephone interview. When the 29-year-old refused, she was hustled to the door.

Well, duh, lady. Your “youths” appear to be compulsive arsonists; your imams want to take over the world. And you think your symbol of political affiliation won’t give your employer the jitters? Islam is not merely religious piety, it is also incorporates a mode of dress which implies a political affiliation. Your veil speaks volumes about you, and none of it makes pleasant reading for the rest of us.

People like this remind me of high school kids who show up for part time jobs looking sullen and decked out in ghetto gear. No one wants to hire them either. Their mode of dress is also an open book about their attitude and where they place themselves in the pecking order – i.e., not very high at all. Ghetto gear attire and a solid work ethic just don’t seem to go together. You intuit somehow that the baggy pants and exposed boxer shorts clothe the body of a clueless individual. 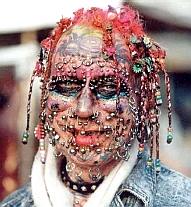 Their older brothers and sisters are covered with metal piercings and tattoos. Who wants to employ someone who deliberately — and literally – defaces himself? And yet these kids are surprised, resentful even, that employers are not only not breaking the door down to hire them, they’re even running in the other direction.

The woman in the veil, the kid in the ghetto gear, the girl with the orange hair and lip piercings don’t get life’s basic fact: the world is not about you. Get over it and join the rest of us or decide to go job-free.

The Times says of the new strictures against Muslim women’s head gear:

Feeding the controversy are a series of incidents pitting Europe’s Muslim population against its Christian majorities: Last year’s riots in France, the Danish cartoons of the prophet Muhammad, the slaying of Dutch filmmaker Theo Van Gogh, honor killings in Germany, terrorist attacks in Britain and Spain, and Europe-wide concerns about illegal immigration.

“There’s a rise in Islamo-skepticism,” said Franck Fregosi, a specialist on Islam at France’s National Center of Scientific Research. “There’s a fear and tension that’s installed in certain parts of the population, and I don’t think it bodes well for the future.”

No kidding, Franck? And do you think this jihadiphobia is reality-based? Do you think this “fear and tension…in certain parts of the population” has any experience behind it? How about you, Franckie, me boy? Are you willing to take a stroll through the no go areas of French cities? They darn well “don’t bode well for the future” of anyone, including the denizens of those hell-holes.

Attention Job Seekers: show up for our interview looking like the rest of us if you want anyone to take a risk in hiring you. Your victimhood is all in your head – on on it, in the case of the veil and the piercings.

Anyone needing help in grasping the fine art of getting hired may apply for a hand-made clue bag. In fact, as a kindness, prospective employers might consider handing them out to the clueless when they show up at the door, employment form in hand and clothed in Hallowe’en attire. Maybe the clue bag could be in the shape of a fortune cookie – the unwanted prospect could open it up and read the reasons for his or her rejection.

But the basic reason underlying all this demand to make you conform is a simple principle: it you want to work with others, make some effort to look like them, act like them, and generally try to fit in. If you want to drape yourself with veils, stick pins in your face, or dress like a hooker or a drug merchant, you ain’t gonna make it. Work relationships are built on trust, and initially, trust is a visceral, limbic response to how one appears.

Some people do get this elemental point:

Women employed in the public sector in France also are barred from wearing veils at work. The legislation has drawn widespread support, including from many Muslims.

“If you’re in Europe, you need to live according to European customs. Either you adapt or, if you want to wear Middle Eastern clothing, you leave,” said Khadija Khali, head of a French Muslim women’s group. A practicing Muslim who has gone to Mecca five times, Mrs. Khali does not wear a veil.

There is hope yet.

9 thoughts on “Veiled and Reviled”