I’d meant to post on this a few days ago, but it slipped into the recesses of my swiss cheese brain before I made it to the keyboard. Fortunately, a commenter, Vol-in-law, reminded me of Ms. Sabuni by putting up the link to her story in a previous post.

As tardy as I am with this, because of her stance on what were previously untouchable issues in Sweden, her story is worth more than an MSM drive-by. 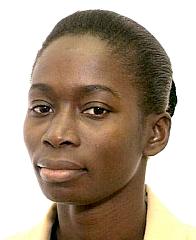 She’s rather like her fellow-warrior Hirsi Ali, except that she has had the advantage of being in her adopted country since the age of twelve. Like Hirsi Ali, her father was a dissenter. Unlike her, Sabuni did not have to run away to escape an arranged marriage, nor did she have to make her own way in a foreign country, a foreign culture and a new language.

These differences may account for Ms. Sabuni’s softer approach. She is not likely to raise the ire of the Swedes by deliberately flouting their mores. Not only does she seem to feel that she is Swedish, but she is also coming of political age at the point where Sweden is beginning to question itself about the wisdom of its decisions vis-à-vis immigration.

The latest media darling of Scandinavian politics is not only black, beautiful and Muslim; she is also firmly against the wearing of the veil.

Nyamko Sabuni, 37, has caused a storm as Sweden’s new integration and equality minister by arguing that all girls should be checked for evidence of female circumcision; arranged marriages should be criminalised; religious schools should receive no state funding; and immigrants should learn Swedish and find a job.

Sabuni believes all immigrants must try to become proficient in Swedish — just as she did when she arrived from Africa aged 12 — rather than alienating locals.

“Language and jobs are the two most crucial things for integration,” she said. “If you want to become a Swedish citizen, we think you should have some basic knowledge of Swedish.”

An elegant, vivacious woman who uses subtle make-up and wears soft clothes in pastel shades and tight woollen sweaters, she argues for a total ban on veils being worn by girls under the age of consent, which is 15 in Sweden.

African Americans in this country who don’t toe the Democrat party line are dismissed as “oreos.” You know, black on the outside, etc…What Muslim appellation could be used in a similar fashion here? I mean she’s Muslim on the inside, but a real Swedish citizen on the outside, especially taking into account her position on assimilation and on female genital mutilation, not to mention her stance on veils.

Maybe the only label that applies is “fatwah material,” since she sure is taking her life in her hands with these new demands on resentful Swedish Muslims.

Sabuni is certainly the perfect counter-example to the narcissists who insist that the world adapt to them. And believe me, all God’s narcissists ain’t a Muslim.

Just look at the entitlement recipients in our own country to get an idea of the depth of the problem. It’s a progressive disease called “Jesse Jacksonism” and it’s fatal to the trajectory of a well-lived life. In fact, if fatwas were our cultural method of disapproval, then Thomas Sowell, Clarence Thomas, Larry Elder, and Walter Williams would have been issued their fatwa cards years ago. Not to mention Mr. Steele of Maryland, who must have nerves of steel to continue.

*The title of this post is a paraphrase of the title of a book written in the 1970’s about one of the founders of the southern Black Farmers’ Union that attempted to form forty years earlier in Misissippi. Looking over his ruined fields of cotton, destroyed by the boll weevil, the subject of the book mused “All God’s Troubles Ain’t a White Man” – and that became the title of the book about him.