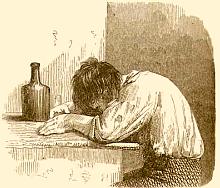 One of the tenets of Islam is that a follower of the prophet is not permitted alcoholic beverages. The behavior of Mr. Moustafa Moufaden on a plane flight from Shanghai to London tells us why this restriction might be a good idea.

According to Monday’s Richmond and Twickenham Times, Mr. Moufaden may have overindulged in adult beverages while on the flight:

A Brentford man who went berserk on a plane, shouting that he knew Osama Bin Laden, had to be restrained with hand and leg cuffs.

Demanding that the captain of the flight from Shanghai to London’s Heathrow should call his bank to check his credit rating, 36-year-old Moufaden “shouted loudly that he had contacts with Osama Bin Laden”, prosecutor Nicholas Rimmer told Isleworth Crown Court on Monday.

“This caused considerable concern among crew and passengers,” he said.

I’ll wager that last sentence is an understatement.

A stewardess had to summon her male colleagues for help and they asked for restraining equipment to be on hand.

Mr Rimmer added: “About five hours into the flight his drunkenness and behaviour had deteriorated to such an extent that the crew considered him a danger to the safety of the aircraft and he was placed in restraints — hand and leg cuffs — in a seat at the back of the plane. It took the involvement of 14 members of the crew who were, of course, taken from other duties,” said counsel.

“Then they took it in turns to keep an eye on him. He continued to have aggressive and violent mood swings being calm one minute and then shouting”.

Mr. Moufaden is in custody now in Britain, and, when he has sobered up, will face charges.

4 thoughts on “Drunk With Jihad”