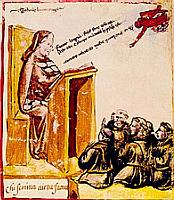 This week’s Carnival of Homeschooling is up, hosted by Principled Discovery. There are so many participants this time that I couldn’t begin to list them all. But I’ll give you a couple of samples.

The Imperfect Homeschooler attempts a gentle re-education of John Stossel, who recently published a column supporting homeschoolers but expressing amazement that anyone could manage to do it. The verdict? “You could handle it, Mr. Stossel”:

Their kids come home from school sullen after being locked up in a classroom all day, hardly interested in tackling their homework, and ready to fight about it. Meanwhile, Mom and Dad are beat from a long day of work preceded and followed by a harrowing commute. They feel like supervising the kids’ homework about as much as having a root canal, but it must be done. So the exhausted parents fight with the cranky kids about doing their homework, and that’s the picture homeschooling brings to mind when these parents consider the concept.

People only know what they know. How can I get across to Stossel and the rest of them that homeschooled kids aren’t kids who come home every afternoon irritable and tired? Kids who haven’t gone to school have ownership of their time. They don’t have to ask for permission in front of thirty kids when they have to go to the bathroom. They eat when they’re hungry, not from 11:15 to noon because it said so on their schedule. They don’t have to worry whether what they’re wearing is in style; it may be pajamas, anyway. The freedom homeschooled kids have makes them different people than they would have been if they’d been going to school every year.

When I was homeschooling the Future Baron Bodissey, homeschoolers were generally considered wackos, and their kids were weird. I heard the same question over and over again, “I can see why a homeschooled kid can learn well, but how will he ever be socialized?” It was so predictable that I could have had cards printed up with my response, which was to say dryly, “Right — I’ve noticed what a good job the public schools are doing at socializing children.”

Now that so many homeschooled children have grown up and gone on to college to become well-rounded top scholars and graduate at the top of their class, the criticisms have had to change. Many people still object to homeschooling — it’s just not right — but their arguments are different. K-Dad discusses the constantly shifting objections to homeschooling:

That’s the reason that we must oppose the other criticism, “home schooling is fine for qualified parents.” Public schools are tax-funded, government-run, and expert-driven. Home schools generally get by on little more than faith, hope, and charity. There are some parents who can’t teach chemistry, but there are no parents who can’t look for someone to help. There are parents who can’t spell, but none that can’t look for someone who can. The only absolutely essential qualifications for a home schooler are that they love their children and do whatever it takes to help them succeed.

There’s much, much more available — resources, tips, anecdotes, and just plain entertainment — at the Carnival of Homeschooling.

7 thoughts on “The Carnival of Homeschooling”