Fausta draws our attention to the plight of a French university professor who has joined the ranks of those who require police protection for speaking the truth about Islam.

As I posted yesterday, Robert Redeker, a French 52-yr old philosophy professor, wrote an op-ed article in Le Figaro stating that Islam is violent, and denounced the violence in the Koran.

After receiving several death threats in the mail, Prof. Redeker and his family have had to go into hiding. The police are taking the threats very seriously and are keeping watch on his now vacant home. 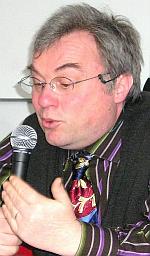 The reactions generated by Pope Benedict XVI’s analysis on Islam and violence aim to continue Islam’s attempt to suppress what is most valuable in the West and which Muslim countries don’t have: freedoms of thought and expression. Islam tries to impose its rules on Europe: restricting public swimming pools at certain hours for women only, prohibition to caricature this religion, requiring the compliance of strict dietary rules for Muslim children in school lunchrooms, fighting for wearing the veil at school, and charges of islamophobia against those who are not like-minded.

How to explain the prohibition of the string bikini at the Paris-Beaches [translator’s note: for a few weeks in the summer the banks of the Seine are converted into a public “beach” in Paris, complete with sand] this summer? It was a strange argument: because of the risk of “disorders against law and order”. Did that mean that bands of frustrated young people were likely to become violent from the display of beauty? Or did one fear islamist demonstrations, via virtue brigades, within the Paris-Beaches?

However, allowing the wearing of the veil on the streets is, because of the support to the oppression of women that the veil signifies, more likely “to disturb the law and order” than the string bikini. One is not out of line in thinking that this gesture represents an Islamization of the French spirit, a submission more or less conscious to the tenets of Islam. Or, at the very least, that it results from an insidious Moslem pressure on the spirit. Islamization of the spirit: even those which protested against the inauguration of a Jean-Paul-II Square in Paris do not oppose building mosques. Islam tries to force Europe to yield to its vision of man.

As formerly with Communism, the West is under ideological monitoring. Islam arises, like the image of late Communism, as an alternative to the Western world. Following the example of the Communism of old, Islam, by aming to conquer the spirit, strikes a sensitive cord. It boasts a legitimacy which disturbs the Western conscience, always sensitive to others: to be the voice of the poor of the planet. Yesterday the voice of the poor claimed to come from Moscow, today it would come from Mecca! Today again, the intellectuals incarnate this eye of the Koran, as they incarnated the eye of Moscow yesterday. They excommunicate for islamophobia, as they did yesterday for anticommunism.

The next time I’m tempted to engage in another round of Mock-the French, I’ll remember Prof. Redeker. His case demonstrates that there are people in France who have the courage to stand up and speak the truth, even at great personal risk.

Thanks to commenter Fluffresponse for the correction of the spelling of Prof. Redeker’s name. Having the correct spelling allowed me to find a photo of him. Don’t you love his tie?

6 thoughts on “A French Professor Goes Into Hiding”