Politics Central has just posted a Roger Simon interview with Sen. Joe Lieberman of Connecticut. Sen. Lieberman, as most of you know, was recently beaten in the Democratic primary for his seat by a “netroots” upstart, Ned Lamont. Sen. Lieberman has decided to run in the November election as an independent, and — as of the most recent poll I saw — is well ahead of his opponent.

Politics Central has both video and audio of the interview, as well as a transcript. Here’s a quote: 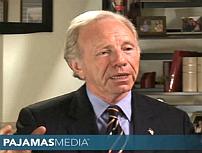 …you know, my record about ninety percent of the time I vote with the majority of Democrats in the Senate but I happen to have had a very strong record on defense and foreign policy and on the specific case, on the Iraq war. And the most alarming reality of the primary was that a lot of Democrats in Connecticut — really over forty-five percent at one poll — said they thought I had done a good job as senator for the state, the country. They knew that they agreed with me on most issues but they disagreed with me on Iraq. And on that basis, they were going to vote against me. And that’s not healthy. It happened to be me who suffered from it.

– – – – – – – – – –
I’ve always respected Joe Lieberman. During the 2000 election campaign I watched him compromise his former stances on many issues and pander to his Democrat base, but he never backed down from his support of a strong national defense, no matter how much the party moved in the opposite direction.

But 95% loyalty wasn’t good enough for the new kingmakers; it had to be 100%. Now he’s on his own, and will probably win the election. We’ll see what happens next.

2 thoughts on “Interview with the Apostate”