Planck’s Constant has an excellent explanation for the photo-shopping of the war in Lebanon:

He’s right, of course. Not only is the photoshopping taqiyya, but the picture bites from all those Palestinians – oops, all those poor Palestinians being massacred here and there by the wicked Israelis are also examples of blatant lies taqiyya.

Whether it’s Jenin, or the Gaza beach, or the checkpoints where children are killed by evil Joos, it’s all taqiyya, all the time. If any one of these “victims” told me the sun was shining, I’d still go to the window to look.

In Western culture, we call this pathological lying. In Islam, at least when engaged with the infidel or with some sect of Islam you don’t agree with, taqiyya is not only allowed, it is considered a virtue. Don’t forget this is the religion that gave us assassination.

This may be a chasm we can’t bridge. Rather like the chasm between the MSM and reality…and in the case of “journalists” it’s always a good idea to verify, using at least three sources. In the event you’ve been out of the loop for a bit, and missed the Pallywood video, go here. This is a pluperfect example of taqiyya in action. It will prepare you well for any “news” out of Lebanon -or the whole Middle East, for that matter. 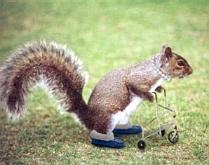 And be sure to check out the wonderful photoshopping on Planck’s Constant, linked above. My favorites? The ancient little squirrel in her slippers, using her walker to get around, and the two-legged Muslim horse. Depending on your gender, you may prefer his pictures of feminine pulchritude – as in Scarlett Johansson, who is not photoshopped, though on the other hand she may have done a little enhancement here and there. But that’s Hollywood, not Pallywood’s taqiyya.

Just ignore P.C.’s apologies for photoshopping and his claim that he’s ashamed. That picture of George Bush is fine work, and he knows it. Such assertions are but another example of taqiyya, if you ask me.

7 thoughts on “Taqiyya for Fun and Prophet”