A Reuters’ SUV got blammed by Israeli forces near the Gaza border on Saturday. Journalists were injured and the van isn’t faring so well, either:

The Israeli army said it did not realize the car’s passengers were journalists and only attacked because the vehicle was driving in a suspicious manner near Israeli troops in the middle of a combat zone.

Seems to me that each side recognizes their own “good guys.” 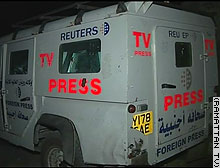 Meanwhile, it is of interest to compare the tactics of the IDF with those of the Holy Jihad Brigade. The latter appears to have coereced “conversions” to Islam from the captives as a condition for their release. An interesting theological approach.

The IDF seems to prefer the direct method.

9 thoughts on “Messing with the Press”