Tonight, consistent with our obligations of the ABM treaty and recognizing the need for closer consultation with our allies, I’m taking an important first step. I am directing a comprehensive and intensive effort to define a long-term research and development program to begin to achieve our ultimate goal of eliminating the threat posed by strategic nuclear missiles. This could pave the way for arms control measures to eliminate the weapons themselves. We seek neither military superiority nor political advantage. Our only purpose — one all people share — is to search for ways to reduce the danger of nuclear war.

It has taken twenty-three years, but Ronald Reagan’s dream of a Strategic Defense Initiative is that much closer to being realized. Here is yesterday’s AP report: 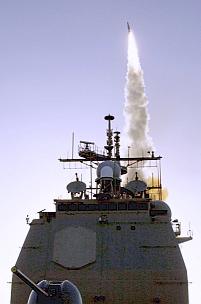 HONOLULU — For the first time, a Navy ship at sea successfully shot down a long-range missile in its final seconds of flight, the military said Wednesday.

The test was seen as an important step toward giving ships the ability to shoot down weapons as they are about to hit their targets. Until now, the Standard Missile 2 was only launched from ships to intercept a long-range missile in the early or middle stage of flight.

For the test, a missile fired from the Pacific Missile Range Facility on Kauai was destroyed in its final stage by an SM-2 launched from USS Lake Erie.

The Navy already can shoot down a missile in its final stage with a Patriot Advanced Capability 3, or PAC-3, missile launched from land.

The experiment with the SM-2 could broaden a warship’s capability, said Rear Adm. Barry McCullough, director of surface warfare on the staff of the chief of naval operations.

The Pearl Harbor-based Lake Erie is equipped with technology that allows it to detect and track intercontinental ballistic missiles. Since 2004, U.S. warships with ICBM tracking technology have been patrolling the Sea of Japan, on the lookout for missiles from North Korea.

Why did it take twenty-three years instead of five, or ten?

Readers of a certain age will recall the immense resistance to SDI that President Reagan encountered in a Democrat-controlled Congress. His successor, George H.W. Bush, was surrounded by stability-freaks — the Scowcroft wing of the national security establishment — and never pressed overly hard for something the Democrats would have obstructed in any case.

When the House passed into Republican hands in 1994, the situation changed, but by that time there was a Democrat in the White House to obstruct SDI from the executive side. Short of killing the project outright (which was not possible, given the statutory mandate), President Clinton did everything he could, withholding funding, delaying testing, weakening and reducing component projects, all in order to appease an enemy who no longer even existed.

It wasn’t until George W. Bush took office that SDI became more than a dream and a set of plans. Now we are that much closer to making the North Korean and Iranian nuclear capabilities irrelevant, at least as far as the United States is concerned.

The past two decades of delay demonstrate the rigid lock that the pacifist Left has had on public conversation about our national security.

It is bizarre and quaint to assert that preventing a nuclear attack against our country is “destabilizing” and “provocative”, and endangers peace. But that was the dogma for many years, and still is in some circles. Remember all those editorials… “Star Wars” won’t work, and would be a bad idea even if it did work. What more could you expect from that amiable dunce?

Just think how a successful missile defense redraws the strategic map. The United States and Canada — and maybe Western Europe, if they behave themselves — will be protected from long range missiles. Iran is still a threat, but not to the same players in the game. It could still threaten Russia, and China, and Iraq, and Saudi Arabia, just to name a few…

I wonder which world leader is going to change his tune, and when.

UPDATE (from Dymphna): Spook 86 at “In From the Cold” has an expanded version of this saga, with the kind of information which makes his blog so invaluable. Read Missile Defense From the Sea.

15 thoughts on “Ronald Reagan is Smiling”