Calling all you old hippies: remember the Fabulous Furry Freak Brothers? I’m thinking specifically of the oft-repeated situation in which the pigs are banging on the door while Fat Freddy, Phineas, and Freewheelin’ Franklin are scurrying madly around the apartment, gathering up bushels of dope to dump in the toilet while screaming, “Flush the stash! Flush the stash!”

Well, that’s the situation that our nation’s ports may find themselves in, with the Coast Guard filling in for the pigs, and Al Qaeda playing the Freak Brothers. Picture the containers going over the side of the ship while someone yells “Dump the nukes! Dump the nukes!” In Arabic, of course.

According to an article in today’s Los Angeles Times (registration required):

WASHINGTON — The Coast Guard said Saturday that in situations where the likelihood of security threats is considered low, it sometimes alerts captains of arriving ships of an impending search.

The practice is meant to reduce delays and the expense of paying workers to wait unnecessarily to unload cargo, it said.

OK, we’ll only tip them off to the search when the likelihood of an attack is considered low. But wasn’t the threat level considered low on the morning of September 11th, 2001?

The very nature of this war is that surprise is of the essence, and I don’t need the 9-11 Commission to tell me that our intelligence agencies won’t always have advance notice of what Osama and his buddies are planning for us.

But leave that aside for now. The article goes on:

Officials discounted the notion that every search must be a surprise to be effective.

“Sometimes we will board low-priority ships,” said Coast Guard Lt. Tony Migliorini, a spokesman for the Los Angeles-Long Beach sector. “We are trying to assist them. It does not hamper our security mission because we will be able to search where we need to search, regardless.”

“Twenty-four hours is the maximum amount of warning that we give. Sometimes we give them just a few minutes. Sometimes it’s a few hours. This has been our process since 9/11,” Migliorini said.

If this is the post-9/11 process, what must it have been like on September 10th? How much chance is there of any given cargo ship being given a true surprise inspection? To go further, what is the probability of any container being inspected at all?

Some estimates say that as little as 3% of the containers entering our ports get inspected. But let’s be generous, and assume that it’s 6%. That means that all you have to do is ship three of the same thing (nuke, dirty bomb, biotoxin, whatever) simultaneously through three different ports, and you have a 99.978% chance of getting one through successfully.

And that’s if you don’t get tipped off in advance about a search.

The bureaucrat-speak coming from the Coast Guard is not all that reassuring:

“The mission objective of each foreign vessel examination or boarding is carefully measured to accomplish an achievable end. This mission objective might be enhanced by the withholding of information from ship management or by the sharing of information with ship management,” Cmdr. Paul D. Thorne, chief of the Coast Guard’s Foreign and Offshore Vessels Division, said in a statement Saturday.

When the official response is larded with so many make-your-eyelids-heavy obfuscations, you know we’re entering CYA zone.

Let’s imagine what a clear, honest response would be like:

“Sometimes when it’s expedient for me to do so, under the pressure of influential commercial shipping companies and their friends in Congress, I tip a ship’s captain off to a coming search. It’s no big deal; it’s standard operating procedure.”

There, wasn’t that refreshing?

“The discretion of information-sharing is largely, but not solely, within the hands of the captain of the port and may not present a uniformity on a national scale,” he said.

In other words, “The left hand doesn’t know what the right hand is doing.”

Federal officials responsible for port security have long sought to develop systems for focusing on likely threats and identifying shippers that appear to pose relatively low threats. They have also acknowledged that it is not feasible to disrupt the transportation system on which major segments of the U.S. economy depend. [emphasis added]

Now, there’s the rub. It’s in the same general general category as appeasing the mullahs to try to keep the price of oil from going any higher.

The smooth operation of the national and world economies is an absolute good, and above all, a political necessity for those holding elected and appointed office.

The question is, If I do the right thing, will I ever be able to win another election?

Since important issues are decided by shrill demagoguery, by the dumbed-down, simplified, and agenda-ridden way the mainstream media portray our national security, there is no easy solution to this problem. If you add the powerful influence of commercial interests, doing the right thing becomes a near-impossibilty. Money will always play a major deciding role in policy.

“There is a great relationship between industry and the Coast Guard,” said Daniel Tremper, a Coast Guard spokesman in Washington.

I’ll bet there is.

Maybe we should have listened to Freewheelin’ Franklin after all: 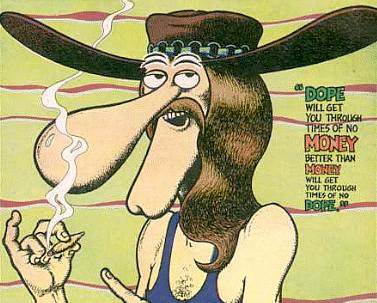 5 thoughts on “Quick, Flush the Stash!”