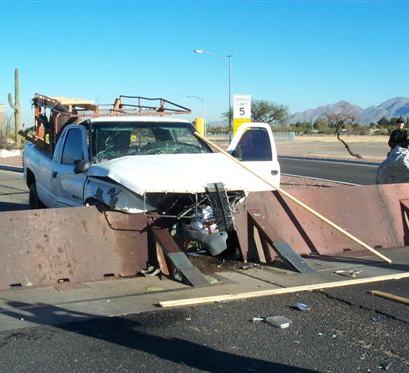 Commenter Bill Keezer sent this picture of an attempt to run the Swan Gate at Davis-Monahan AFB in Tucson. The intruders found out the hard way that the pop up barrier works.

In case you’re wondering: no, it wasn’t terrorists, just pests. Two drunk “undocumented” aliens from south of the Border. Who knows what they had in mind? Or if they even had a mind between them at the time.

The driver will be arrested when he gets out of ICU. The passenger was sent on to a hospital in Mexico.

I think the driver should be returned also, as soon as he’s stable. Why bother prosecuting him when it just means we have to also take care of him?

One thought on “Some Barriers Work Better Than Others”