Update (4:30pm EST): I drove over to Short Pump to try to get a picture of the site of the Great Jet Fuel Geyser, but the neighborhood was blocked off and immense equipment was in operation all over the area. There was no place to park on Church Road, and the police were directing traffic, so no photos today.

It looked like the EPA and the pipeline people were digging up all the culverts and replacing them. There were huge pumps operating just above Lake Loreine, gushing large amounts of water into the creek. I assume they’ve been drawing the water out of the creek, filtering it, and then putting it back. A strong chemical smell pervaded the whole area.

This is a huge, expensive operation. It makes me wonder how much overhead it adds to Plantation’s 2¢ a gallon pumping costs from Baton Rouge to D.C.

Until last night I didn’t know that there’s a pipeline carrying jet fuel that runs from Louisiana to D.C. It passes under the West End of Richmond near Short Pump in Henrico County, through an area that was mostly countryside thirty years ago, but is now an upscale suburb.

According to a story on last night’s local NBC 12 news,

A 3,000 foot pipe ruptured in Henrico County Monday night, sending jet fuel 30 feet into the air. Residents had to be evacuated from about 20 homes. No one was injured.

This morning, that spill has been contained and residents are home, but they’ve still got to deal with the cleanup.

The actual TV news program had a lot more information, including interviews with local residents, video footage showing the big puddles of jet fuel still standing in people’s driveways, and shots of local emergency crews dealing with the situation. One man described standing in his backyard looking up at a “geyser” of the smelly stuff.

The local paper, the Richmond Times-Dispatch, also has a brief report this morning, including this information:

[Henrico Fire Lt. Gary] Hutchison said Plantation Pipe Line Co. had been working in the neighborhood during that time.

Plantation released a statement that said workers temporarily suspended operations on a portion of its pipeline. The statement said the company is working on the cleanup with emergency responders.

The petroleum product, similar to kerosene, emits flammable vapors, Hutchison said. But cool weather and moist ground reduced potential for the fuel to ignite, he said.

This same pipeline was one of those temporarily shut down by Hurricane Katrina last year. The Plantation Pipeline website says:

The Plantation system consists of approximately 3,100 miles of petroleum products pipelines connected to 130 shipper terminals in 8 states. These delivery terminals are owned by petroleum refiners, marketers, military, and commercial fuel users. Products are tendered to our system from 9 refineries in Mississippi and Louisiana, from other products pipeline systems, and via marine facilities on the Mississippi River. Deliveries of motor gasoline, diesel and home heating fuels, aviation gasolines, kerosenes, commercial and military jet fuels total more than 20 million gallons each day.

Products are received in minimum batches of 25,000 barrels (1,050,000 gallons) and shipped through lines ranging in size from 6 to 30-inches in diameter. A batch leaving Baton Rouge, Louisiana may travel as much as 1,100 miles to reach a final destination such as Washington National or Dulles airports. Total travel time for such a trip is approximately 20 days. Products can be efficiently transported from Baton Rouge to a shipper’s facility in Washington, D.C. for approximately two cents per gallon.

When I see those pipeline signs by the road, I usually think of sludgy oil running through the pipes. But apparently that’s not always the case.

The Plantation site also has a map showing their operation: 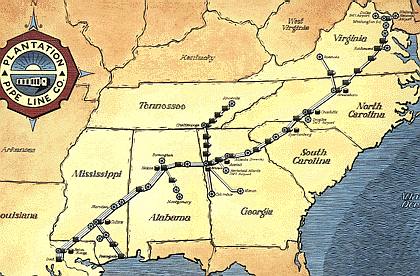 Here’s what the CSG Aviation Jet Fuel Information page has to say about jet fuel:

Jet A-1 is a kerosine grade of fuel suitable for most turbine engined aircraft. It is produced to a stringent internationally agreed standard, has a flash point above 38°C (100°F) and a freeze point maximum of -47°C. It is widely available outside the U.S.A. Jet A-1 meets the requirements of British specification DEF STAN 91-91 (Jet A-1), (formerly DERD 2494 (AVTUR)), ASTM specification D1655 (Jet A-1) and IATA Guidance Material (Kerosine Type), NATO Code F-35.

Jet A is a similar kerosine type of fuel, produced to an ASTM specification and normally only available in the U.S.A. It has the same flash point as Jet A-1 but a higher freeze point maximum (-40°C). It is supplied against the ASTM D1655 (Jet A) specification.

My uninformed opinion is that those Short Pump suburbanites were probably seeing a geyser of Jet A. Now, Jet A is not like gasoline for sheer combustibility, but it is the same stuff that made those big orange fireballs and black clouds around the World Trade Center back in 2001.

It has a flash point of about 120°F, which is not all that hot. What if someone had been out on the back deck firing up a barbecue, or lighting a cigarette?

In that case the NBC 12 story would have been different, a big fireball in the heart of Henrico County instead of a smelly puddle in the backyard. Heck, you’d have seen it yourself on the national news last night.

It makes me think about those 3,100 miles of pipeline. And men in rented cars with binoculars and videocameras, tourists from the Middle East, just here to see the sights.

Checking out the local hot spots. So to speak.

14 thoughts on “Jet Fuel in the Backyard”