Mike Austin has an intriguing take on the immigration marches, the La Raza push, etc. This aspect of the situation has been mentioned before, but he has a more complete report than most.

It’s about Aztlan (Aztec land?) and the fantasy of “taking back” all of the parts of former Mexican territory, both those that were captured in war, and those that were sold by Mexico to the U.S. when Polk was president. 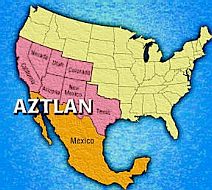 Austin’s blog has good maps and a brief history of the process. But what is most worthy of your attention is his visualizatiion of the Aztlan dream. This map from his main page is the simple version, but you ought to click here,
also, to get a complete picture of the Aztlan group’s vision for 2080.

There is also a website dedicated to this idea. These folks are serious.

Isn’t this eerily like the Islamicist’s fantasy for the recapture of “al-Andalus”? Hmmm…don’t you wonder what Russia dreams about?

A contrary example: is there anyone in Britain bent on reclaiming India? Somehow I doubt it.

And Churchill said to Louis Mountbatten,
‘I just can’t stand to see you today –
How could you’ve gone and given India away?’
Mountbatten just frowned said, ‘What can I say?
Some of these things slip through your hands
And there’s no good talking or making plans.’
But Churchill – he just flapped his wings –
Said, ‘I don’t really care to discuss these things.’

Hint: cultures or people who look back rather than forward are carrying a large burden of resentment and entitlement. In this Age of Victimology, they have many opportunistic fellow-travelers. Watch your back.

23 thoughts on “Aztlan and al-Andalus: Return to a Mythical Golden Age”