…rationality holds out two possibilities for explaining the Arab crash, if we take for granted that much of what goes on economically in these countries is oil-driven. Some of these countries are awash in oil money because of surging prices in the last few years, and so either investors are betting that the oil windfall is over (although oil futures prices don’t suggest that as far as I know), or these countries have spent some of their money foolishly, and investors are suddenly passing a judgment on that. (Egypt, a non-exporter of oil, is admittedly harder to explain using this approach, although the economy is perhaps tremendously dependent on remittances from the Gulf states.)

In addition, see Starling David Hunter in the comments for an amusing Saudi stock market tale. And also visit his blog. Interesting business stories, posts from his students there (he teaches in the UAE) and besides, look at his photo… what a hunk. 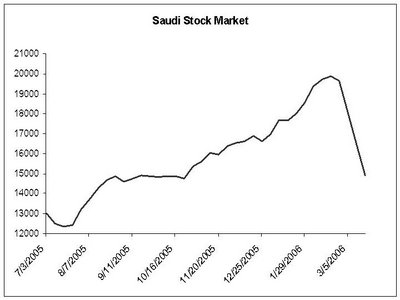 Larry Kudlow is reporting some intriguing figures for stock markets in the Middle East. They are in big trouble:

Shares in Dubai were off close to 12 percent yesterday [on March14], while Saudi Arabia’s Tadawul All-Shares index returned almost 5 percent of its gains. The Saudi index closed trading at 14,900, shedding almost a quarter of its value since reaching a record high of 20,635 in late February. Egypt’s index hasn’t fared any better. It is down 22 percent from its February peak. Similar plunges were felt by a slew of other markets in the region, including Kuwait, Morocco and Jordan.

So what does this mean? Probably a bubble burst that will leave the region less arrogant about its dominance in what is a commodities market — and the only thing they have of value. Since commodities are always volatile — as are offended Muslims in the Middle East — there is a potential for problems here. Despite what the MSM says, we’re currently awash in oil… though nature can take care of that in a hurry, as it did with Katrina.

According to Mr. Kudlow:

The chief catalyst contributing to the seismic corrections was the growing concern that share prices had gotten way ahead of themselves following a three-year bull run. The failure of the Dubai ports deal certainly did not help investor psychology either. And, perhaps, there has been some discounting going on due to the possibility of lower energy prices in the future. Lower oil prices will certainly lead to lower government and corporate income in the Gulf region.

Methinks that Hamas will be on a budget real soon. Which of course, will not prevent them from stirring up the street, shooting off guns and their mouths with those tired old slogans about Joos.

You know that those money-grubbing, powerful Zionists are behind this, don’t you? With Egypt’s stock market going down the tube, they will need our aid more than ever, and will continue to back organizations like the Muslim Brotherhood. At least the man in the Egypt street will do so. The Egyptian government is stuck between a rock and a hard place.

So what do you think?